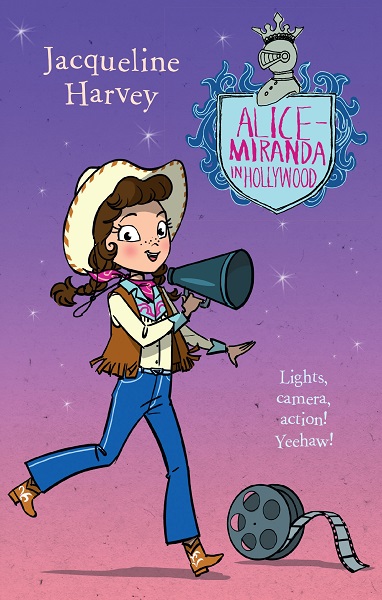 Alice-Miranda and her friends are off on another exciting adventure. They have been chosen to act in Lawrence Ridley’s new western movie in Hollywood. But there is something strangely suspicious going on behind the scenes. Could it be sabotage or is the rumour of an old curse true? Time is running out for one of the characters. Can Alice-Miranda figure out the mystery in time?

Alice-Miranda Highton-Smith-Kennington-Jones is no ordinary nine-year old girl. Although, as her name suggests, she is outrageously wealthy, she is largely unaffected. Young readers can vicariously experience the exclusive life of privilege, which also affords our main character entry into worlds, giving immense scope to the author. In this episode, the action primarily takes place on set in a Hollywood studio. The children see what it is like inside a Hollywood mansion and experience the grandeur of the Grand Canyon when the crew go on location.

Alice-Miranda acts with a maturity beyond her years. She is smart and highly confident, so much so that other characters, including adults, trust her and confide in her – a device that keeps the clues coming. She is optimistic and loyal, endearing qualities that make her a positive role model to her readership. Although the huge cast of characters may be hard to keep track of for a first timer, fans of the series will presumably have a better knowledge of Alice-Miranda’s entourage. There is a helpful Cast of Characters list at the end (which I wish I had known about at the beginning!). The colourful characters may be stereotyped but are lots of fun. I love that their names reflect their personalities. My favourite character is Magdalena, the Ridley’s Latino cook. Her dialogue is written how her accent would sound – such fun to read aloud. Other memorable characters are Griselda Futzwangler, the musical director (total diva who surprisingly falls for the school Drama teacher, Harold Lipp), and Tyger Lombardi, the paparazzo who, ridiculed for what she does, is shown to be a person worthy of respect.

I was puzzled by the age of the main character, considering the readership. Usually the main character’s age is pitched a little higher than the reader. Children don’t generally want to read about characters  that are younger than themselves. Yet the novel length, font size and vocabulary suggest it is aimed at mid to upper primary. In Harry Potter fashion, Alice-Miranda grows older as her series evolves.

The plot is a little slow to develop but the action comes thick and fast at the end. I can see why her books are so popular with her readers – escapism, mystery, adventure, humour and wholesome values. Besides the helpful Cast of Characters pages at the end, there is also a Glossary of Film Terminology and an In Case You Were Wondering…where the loose ends are tied up. The author’s site is very comprehensive and accessible with lots of information and fun for the readers (and teachers), including the Alice Miranda name generator . Alice-Miranda in Hollywood is the sixteenth book in the series. Recommended for good independent readers from 8-12 years.