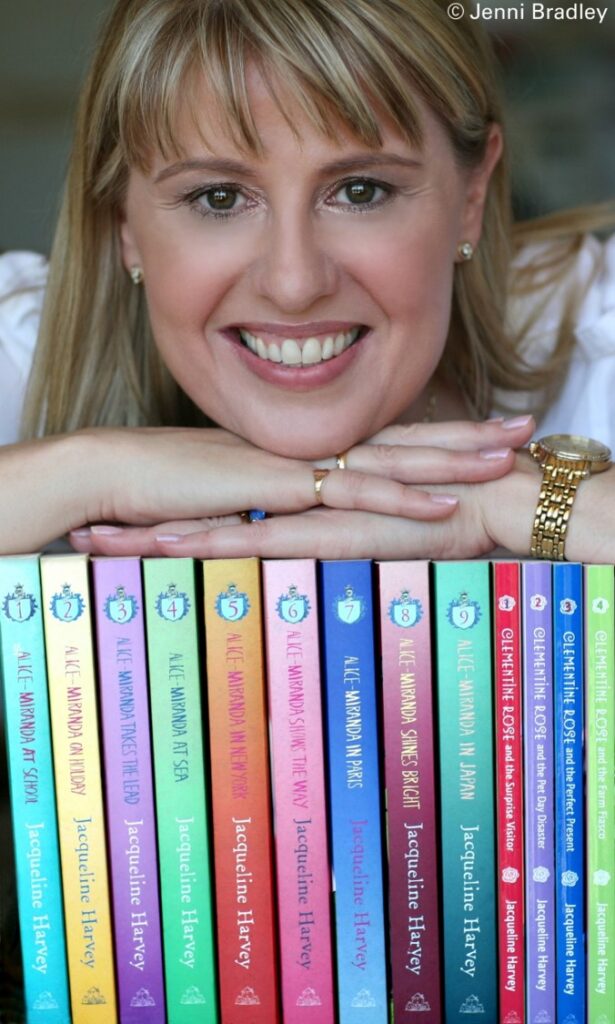 Alice-Miranda was firmly planted in my head long before Clementine Rose was even a thought. I worked on developing the first Alice-Miranda book for almost four years. During that time, I was fortunate to be working as Deputy Head of a girls’ school in Sydney and had opportunities to test the material on the students – I had always figured that, as they were the intended audience, I should seek feedback from those who I hoped would ultimately be the readers.

When I started thinking about Clementine Rose I liked the idea that there would be interconnecting elements between the two series. For example, Clemmie goes to Ellery Prep, the school Alice-Miranda attended before she headed off to boarding school. Poppy Bauer lives on the farm at Highton Hall (where Alice-Miranda’s family resides), but goes to school with Clemmie and is one of her best friends and Daisy, who lives in Rose Cottage at Highton Hall works as a casual receptionist at Clementine’s family doctor’s surgery. There are lots of little things and in Clementine Rose and the Seaside Escape the two girls meet. Alice-Miranda mentions this at the start of Alice-Miranda in Japan. The meeting is short – at the beach when Clemmie and her friend Freddy are building a sand castle, but ultimately I’d love to have them appear in a story together. That said, I really do have to keep them separate when I’m writing the two series.

The Alice-Miranda stories have many more characters than Clementine Rose and the mysteries are quite complex, so it’s ideal if I can focus solely on one story at a time. However, I’ve quite often just finished one book when I have to start another, so sometimes there will be an overlap with editing a Clemmie book while working on the draft for Alice-Miranda. Because Clemmie is much shorter, I can usually manage that reasonably well, but I can’t work on the editing for Alice-Miranda and write a Clemmie at the same time – I think it’s to do with the greater plot complexities of Alice-Miranda. I really just have to clear my head and I don’t ever work on both series on the same day – that would be far too confusing.

It’s impossible to know exactly why the two series have struck a chord with the readers but from the feedback I get, children (and adults) seem to really value Alice-Miranda’s kindness and Clemmie’s quirkiness. Children often tell me how much they admire Alice-Miranda’s ability to be friends with everyone – forgiveness is also a much mentioned focal point as is her bravery. Her friends, particularly Millie and Jacinta, are well loved too, and the boys who feature most, Lucas and Sep seem to have garnered their own following. Interestingly the hint of romance between Lucas and Jacinta is something lots of readers tell me they really enjoy. Clemmie inhabits a much smaller world and I think there is a lovely mix of children and adults – from the strict and shouty teacher, Mrs Bottomley to lovely Uncle Digby and Clemmie’s school friends.

Both series are adventurous – there is a lot of escapism and freedom for the children (more so in Alice-Miranda) and I think kids just love the idea of being able to take charge of the action like the characters do. I was recently asked if I’d ever met any children like Alice-Miranda and I can honestly say yes – children from a range of backgrounds who remind me of her. Clemmie is adorably innocent and the fact that she wants to be helpful and it often doesn’t quite work out really seems to resonate with the readers. It doesn’t hurt that she also has an extremely cute and unusual pet in Lavender, her tea cup pig.

I think the fact that there is a liberal sprinkling of adult characters of all ages across both series seems to work really well too. My grandmother taught me from a young age the value of the elderly (not that she was old when I was little – she was only 46 when I was born!) but she volunteered at an aged care facility and pretty much every school holidays I would go with her to help. I still remember some of the residents to this day, and how fascinated I was to listen to their stories. There was one old chap with a glass eye, who used to terrify and thrill me in equal measures. I have always loved older people and have been blessed to grow up with four grandparents. I still have two grandparents today and I love hearing about their lives. I like to think I write the older characters with a degree of realism and heart- at least I hope so. I adore Aunt Violet and Uncle Digby in the Clemmie series. The crustiness of Aunt Violet which has become a lot less so over the series – the way she interacts with Clemmie and the banter between her and Digby are all very important.

I suspect that one of the reasons the stories work with children is that I love them – I truly adore the characters and they feel so real to me. I can’t imagine not writing Alice-Miranda’s and Clemmie’s stories and I hope that comes across to the readers.

I think the biggest insight I have from doing all those school talks across the world is that kids are kids wherever you go. They want the same things – to learn, to be heard, to matter. The biggest difference is opportunity. It breaks my heart when I walk into a school (more so in the UK) where there is no library and barely a tiny collection of books. Teacher librarians are virtually non-existent in primary schools in the UK and I think that really impacts the development of reading for pleasure. Of course there are loads of passionate teachers who are allocated library duty on top of their teaching loads and do a wonderful job of it, but I think we are so blessed here in Australia to have teacher librarians and we need to fight to make sure that they remain in place.

Having worked in school for so long, I absolutely draw on my memories to create new characters, be it a snippet of behaviour, a quirk, something that made me laugh – or even cry. I had so much fun teaching – and there are so many stories I can adapt for the books – from my first ever overseas trip to Japan with 34 Year 5 and 6 kids, to stern teachers, camp chaos and funny comments. I taught co-ed for the first ten years, so there are plenty of boys who spring to mind too.

School talks are loads of fun – I love making the children laugh and often begin by telling some funny stories about my own life before talking about the books. Prior to becoming a writer, I had seen numerous author talks at school – some of which were brilliant and others that had me wringing my hands in despair. There is nothing worse than seeing a presenter eaten alive by a group of nine year olds. Of course there are authors who have never worked in school who are brilliant, but being a teacher gives you a great big bag of tricks to draw on and I’ve never been afraid to revert to school ma’am mode if required – it’s good to know I can still silence a group of chatterboxes with one raised eyebrow!