This article is designed to show some of the resources which can be viewed at the National Centre for Australian Children’s Literature to help and support teachers and educators create a unit of work regarding Anzac Day. Firstly, some examples where ANZAC and ANZAC Day fall under the Australian Curriculum, secondly, two older Anzac resources are showcased: one rare book; and a poem taken from the NSW School Magazine. Finally, a list of current titles available to view in the Centre or for schools to purchase is included.

ANZAC Day in the Australian Curriculum

ACHASSK012— How they, their family and friends commemorate past events that are important to them. (Foundation) (Education Services Australia, 2015a)

ACHASSK064—Days and weeks celebrated or commemorated in Australia (including Australia Day, Anzac Day, and National Sorry Day) and the importance of symbols and emblems (Year 3) (Education Services Australia, 2015a)

ACDSEH097—The commemoration of World War I, including debates about the nature and significance of the Anzac legend. (Year 9) (Education Services Australia, 2015b)

Showcasing one of the Centre’s Rare Book titles 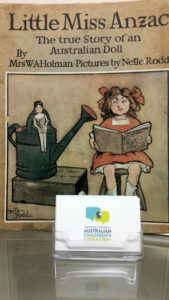 Woodeny is a wooden doll, much loved by the little girl who receives her. Their ‘adwentures’ together are recounted by the toddler and lavishly illustrated in rich period detail. The doll gets thrown against a fence, chewed by a dog, left in a field and used to poke a bat. As a reward the doll is bathed, kissed and fed chocolates.

The author, Mrs Ada Holman, was born Ada Kidgell in Ballarat, Victoria in 1869. She was active in debating and established herself as a journalist, also writing short stories, essays and reviews, both political and literary. In 1901, she married W.A Holman, who served as premier of NSW from 1913 to 1916. She died in 1949.

While not displaying the ANZAC story, this classic piece of writing showcases the 1917 period by an affluent author and can be used to set a mood. It has had its own ‘adwentures’ and came to be a part of the National Centre for Australian Children’s Literature collection. It was published in London and is inscribed December 1917 ‘To Dorothy May Stubbs from Grandpa Dunbar (Captain J. I. Dunbar Glasgow, Scotland)’ It came into the collection of Elizabeth Sheldon, a primary school teacher from Pacific Grove, California. She cannot recall how it entered her collection. Her son, J. D. Sheldon, sent it to the Australian leg of the family, a lady named Barbara Olds, who tried to find descendants of Dorothy May Stubs, but was unsuccessful. Barbara donated this copy of the book to what was then known as the Lu Rees archives for safe keeping.

A digital copy of this book is also available on Trove (National Library of Australia) for study and research purposes.

Showcasing The School Magazine, celebrating its centenary of publication in 2016 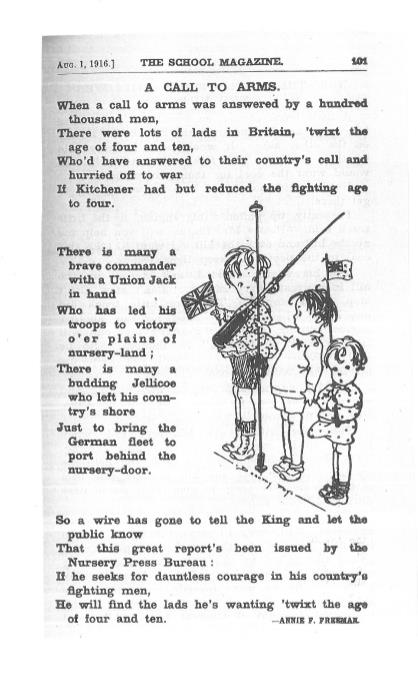 This quirky poem from 1916 is aimed at young children and demonstrates the mood at the time. The poet implies that the number of young men wanting to volunteer would have increased if children as young as four were allowed to enlist. It makes a light-hearted sense of a very real issue at that time. It also demonstrates a willingness to enrol in the armed services and the mood at that time.

NSW Department of Education. (n.d.). The School Magazine : About. Retrieved from http://theschoolmagazine.com.au/about

I am a final year Masters of Education (Teacher Librarianship) student at Charles Sturt University (CSU). I have worked as an Indonesian teacher in the A.C.T. Department of Education and Training for over 12 years in both high schools and primary schools across Canberra. While I am passionate about language teaching, I have always secretly wanted to work in a school library.

With this ambition, I began studying online at CSU in 2013 and have just landed my first role as a Teacher Librarian at Chapman Primary School. Working full-time and studying part time while raising a young family has been challenging but invigorating. I believe that exposing students to high quality literature increases engagement and enhances student learning.

I am delighted that my former ‘secret’ ambition has been furthered and that I am now in the position to share that passion in an organised and structured way. I am completing my internship at the National Centre for Australian Children’s Literature and am gaining an understanding and respect for the literature produced for children in Australia. The Centre holds many valuable resources that I would have been unaware of had I not had this opportunity.