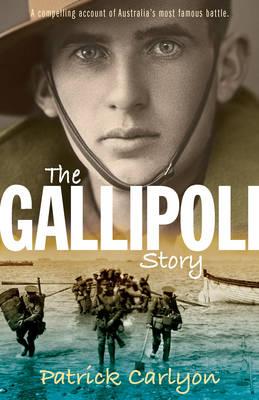 This compelling book (not be confused with Les Carlyon’s book on Gallipoli) reflects upon the nature of this part of the Great War and its effect on everyone directly and indirectly involved. Carlyon uses his natural storytelling ability to hook the reader immediately, creating a style of non-fiction writing that incorporates vivid images, imagined dialogue and constant references to legendary figures. The story starts pre-dawn on 25 April 1915 and continues until the last withdrawal of allied troops in December. This revised edition, an update from Carlyon’s 2003 book (which was a 2004 CBCA Honour Book in the Eve Pownall Award for Information Books) for the 100 year ANZAC commemoration, also includes contemporary reflections on ANZAC Day and the swell of people who now regularly attend.

I kept being drawn into the book on multiple levels. There are photographs, snippets of letters, notes on each chapter with a reference list, a list of VC winners, cartoons from books of the times, maps and diagrams – much to keep the reader interested. There’s a snippet of the actual life of John Simpson here, a reference to Australian historian Charles Bean there – so much so that it doesn’t matter if the text is read chronologically or just where the book falls open. It isn’t short of gruesome detail either and so doesn’t gloss over the terrible conditions on Gallipoli and in the First World War generally. Highly recommended for those with an interest in this period of Australian’s history.