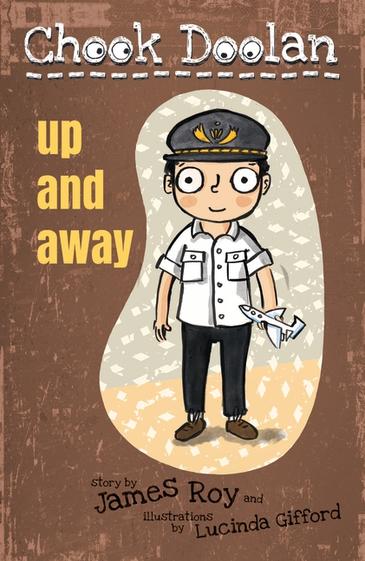 In Chook Doolan’s eighth outing, he’s pondering what to do with his life and wondering whether he should follow in the footsteps of his dad and become a pilot. The problem is Chook – a nickname he’s been branded with because he’s a big chicken! – is scared. He chats with his dad about aerodynamics and learns that plane wings elevate when air goes past the wing at the right speed. In the climax, he comforts a small girl having a panic attack about going on a plane by sharing this physics lesson. And by sharing a joke between him and his dad – that plane wings are not stuck on with sticky tape.

Up and Away could be used at a junior primary level during Careers Week or when studying different careers. At my kid’s school, there is a day where all the kids come dressed-up as what they want to be when they grow up. This book would make a delightful companion to such an event.

This early reader series will especially appeal to boys in junior primary. Its short chapters combined with Lucinda Gifford’s black and white illustrations on each double page spread make it particularly engaging.