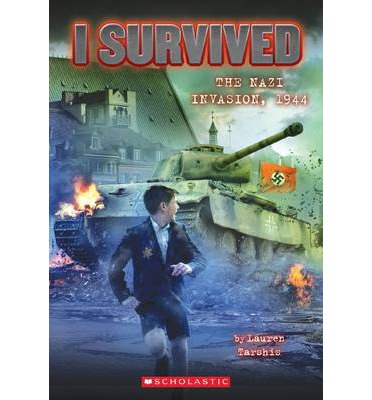 This melodramatic story purports to detail how two Jewish children, Max Rosen and his sister, Zena, escape from a ghetto in Poland after their father had been taken away by the Nazis.  The book ‘is dedicated to the Jewish partisans of World War 11, with special mention to those whose incredible life stories [the author]discovered in [her]research and inspired the characters in this book.’ The lurid front cover shows a young fellow wearing the yellow Star of David fleeing an oncoming Nazi tank bellowing flames.  Here is the stuff of the old boys’ own adventure series written in undemanding and clichéd prose.  The plot is predictable and Max’s voice that of the heroic third person.  The references to the biblical story of David and Goliath carry the necessary overtones that are clearly sounded and spelled out.

Brother and sister miraculously escape after an enemy soldier is ‘hit by his own bullet!’ They meet up with a group of partisans that include their own feisty Aunt Hannah who, unbeknown to them has joined the freedom fighters.  After being befriended by an unlikely farmer, the escapees eventually find refuge in the Loda Forest after a train is blown up Kaboom!  However, the end of the war is looming; the cast of Jewish characters make it safely to Palestine.  All the ends are neatly tied off.

Here is a predictable adventure yarn in a relatively new setting for this genre.  The real value of the book is in the closing section detailing ‘A few more thoughts and facts’, followed by questions and answers about World War II, the Holocaust, and the partisan fighters in Europe along with a relevant timeline.  The narrative itself is simply a relish added to the facts.