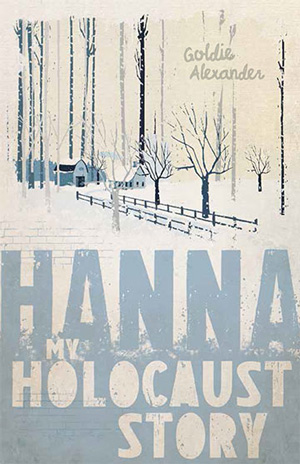 Hanna is one of a series of novels to remind us of this terrible time, its sales supporting the Courage to Care educational program, the aim of which is to show opposition to injustice.

Alexander’s story is about a Polish girl and her family during the German occupation of their country in World War II. Hanna’s life is torn apart when the Nazi’s invade. Her father’s store is closed and the family are forced out of their comfortable home to hide on a farm, then to live in tiny, cold rooms. Her brother must leave his violin behind, and Hanna’s gymnastics are a thing of the past. Starving, sick, terrified and penniless, the family struggles on until, like so many of their friends, they are struck by personal tragedies. However, the book does conclude on a note of hope.

There are many young readers who will have grandparents and great-grandparents who experienced the horrors of the Holocaust, and their stories need to be told. It is seventy years since Auschwitz was liberated, and those dreadful images were revealed.

Alexander keeps the action going, and Hanna’s experiences are evoked with authenticity. Sometimes she does not respond to the deaths around her with emotional conviction, but we admire her courage and empathy with her friends.

After the war, Australia showed a compassion we seem to have forgotten for those seeking asylum here, and many Holocaust victims arrived to enrich our country. Reminding the present generation of the persecution of a people may spur the young to ensure it will not happen again.