The combination of authors, Louise Park and Susannah McFarlane make up the ‘Mac Park’ team; creators of other popular children’s series including Go Girl!, Zac Power, EJ12 Girl Hero and Boy vs Beast. Part of the action-packed, eight-part series aimed at early, emerging readers are the exciting and cleverly constructed Stack Attack and Deep Dive. Alongside the engaging, complimentary graphic-style illustrations and labelled diagrams by James Hart, these books specifically target reluctant and/or new readers with their limited wordage per page and controlled language structures for ease of readability. 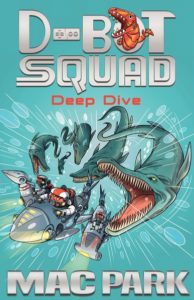 One can also appreciate the child-friendly vocabulary and the sense of imagination that children of this age would naturally adopt in their everyday role play dialogue. Despite the nature of its content, I wouldn’t limit this series solely to boys as I’m sure plenty of girls enjoy robots and dinosaurs, too.

In Stack Attack, D-Bot Squad members, Hunter, Charlie (female) and new friend Ethan are on a thrilling mission to teleport the dinosaur-escapees to their original location via special, high-tech rays and D-vac Super Sucker devices. Charging around in their engineered double d-bot (a double-decker-style robot dinosaur), they face some challenging obstacles, which are conquered with a bit of trial and error, smart thinking and teamwork. There are also elements of positive thinking and encouragement, which lend to facilitating confidence and friendship strategies. Another helpful structure for reading comprehension is the introduction of the next mission, which is then carried through to the beginning of Book 6.

Deep Dive is about the capture of the underwater dinosaurs, no, pliosaurs; the squid-eating kronosauruses. Plenty of onomatopoeia sound effects accompany the exciting journey into the deep as the squad trio become ‘entangled’ in a battle between the species. Hunter, Charlie and Ethan come up with a plan to use some Killer Whales, their enticing Fish Feast Spray and their self-crafted d-bots to manoeuvre the five krons to the island for teleportation. But it’s not without challenges. Again, working as a team, communication and determination assist the squad to succeed.

Engaging and easily accessible to a 5 to 7 year old audience of the dinosaur / robot, high-action-loving nature, the D-Bot Squad series is the perfect set of books to get the kids on a continual reading curve.

Teachers Notes and downloadable activities can be found on the Allen & Unwin website.