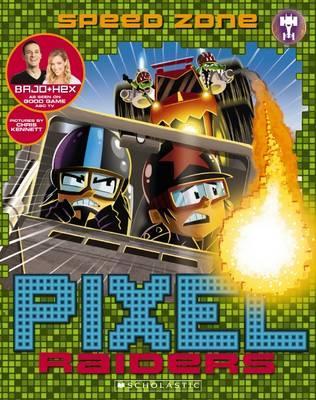 Speed Zone is the third installment in the Pixel Raiders series by gaming TV show hosts Bajo and Hex. Created for children who love gaming, the book continues to follow the journey of racers Rip and Mei through their virtual realities.

Originally beta testers for a new virtual reality game and now racing for their pixelated lives, Rip and Mei are two school children who love to game. Following on from the two previous books in the series, Dig World and Dragon Land, the two are once again racing for the lives of both themselves and their friends whilst battling against the gator minions of the evil Megalava, and hoping to save another world drained dry by evil.

The book was a really enjoyable, and a relatively easy read, yet still exhibited an extended range of vocabulary for the slightly older readers throughout (both gaming terms and larger words alike).

Both characters were highly developed, and definitely reflected the evident traits of many school-age children who love their gaming, both in the slang they use, the ways they navigate the course, and their relationships with each other. Themes of reconciliation amongst the characters, along with hope and self-forgiveness were subtly integrated into the development of various characters, and fit happily alongside the token underdog team, and snarling competitors (quite literally in this case, as the other racers happened to be a pair of alligators!).

The almost-cartoon like illustrations throughout the book were also very effective in their distribution, illustrating certain characters for clarity, and emphasizing different events of the plot with double-page spreads, alongside tiny doodles. In the action-filled sections of the novel, a miniature map at the top of the page also gave a visual representation of the race, which even I found very helpful!

Overall, Speed Zone was definitely something that could take a gamer away from the games (in the best sort of way!). A fun-filled, action-packed children’s novel- the rest of the series is sure to be just as good!  Perfect for anyone aged 8-12.