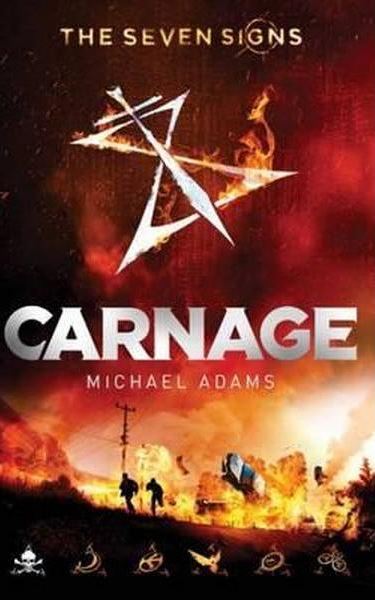 The world is in chaos, the U.N. mystified by the catastrophic computer failures they believe are responsible for the tragic devastation in Egypt. Felix Scott, (a.k.a the Internet King) has taken it upon himself to step up and pledge his support at the U.N. crisis meetings.

Meanwhile, Scott’s seven DARE award winning protégées remain locked in a deadly battle of wits with the mysterious terrorist known only as the Signmaker.  With Yasmin still missing, presumed dead, and Andy and Dylan stuck in police custody, their reputations in tatters, it becomes painfully clear that the Signmaker’s reach is far greater than any of them could have anticipated and his twisted genius knows no bounds.

Questioning who is left for them to trust but desperate to save their friends and prevent the next unthinkable atrocity, the exceptional teens must race to decipher the symbols of the second sign. And, with the meaning of the taunting countdown messages finally revealed, they are left with the cold realisation that if they don’t play to win, the whole world will be left vulnerable.

Once again, Adams’s futuristically advanced technology features prominently throughout the book. The characters all communicate using their brilliantly intuitive Smart Glasses and travel the world in gleaming Space Skimmers, where, in the plush InvisiLounges, the nano-engineered fuselages become transparent so the young passengers can see the Earth below their feet as they shoot through the atmosphere.

The way the author marries ancient symbolic references, puzzles, and anagrams with technology such as tracking systems and multi-phase shifting encryption protocols gives the story a thrilling yet entirely authentic edge that any young reader will appreciate.

The plot moves quickly from one exciting event to the next and, just like Skyfire (The Seven Signs #1), is told from the different viewpoints of our main characters. Headed up with a drop-pin map, each chapter transports the reader from one fascinating location to the next. And whilst Skyfire gave the reader a chance to explore the legendary City of the Dead in Cairo, Carnage shifts the focus to Isobel and Mila, introducing the reader to the shanty towns of Bogota, Colombia as riot police storm the narrow streets where gang-land turf wars rage on, and gives us a closer glimpse of JJ’s studious and exam dominated life as he walks the skyscraper lined streets of his hometown of Seoul, South Korea.

Carnage continues this thrilling descent into a technologically advanced world of cyber-terrorism and criminal genius. The author has an engaging, action focused style that quickly draws the reader into the compelling, problem-solving adventure and leaves them hungry for more as a tension-fuelled cliffhanger concludes each instalment. Aimed at young readers (10+), this high-stakes, intelligent page-turner is an ideal title for any young mystery and adventure enthusiast.