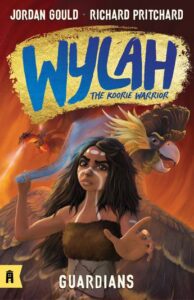 Jordan Gould is a Peek Whurrong Man and Richard Pritchard an Indigenous Samoan. This fantasy novel is set on Marr Country along the southwest coast of Victoria and north into the Grampians 40,000 years ago, when the koalas could be massive and mega fauna roamed the land.

Wylah finds herself the only survivor of her village after an attack from dragons trained by humans under the leadership of Livingstone and Captain Frye. The dragons are compelled by greed for treasures (gold), land, power, and magic. They are dangerous, and they have abducted Wylah’s family and fellow villagers. What can she do? Is she capable of taking up her grandmother’s powerful spear and boomerang? Can she become a great warrior? With the help of five guardians and a devoted monstrous bunyip, will she be able to withstand the fire and fury of the great red dragon?

Through her epic journey to enlist the help of the five guardians of the tribes Wylah proves to be smart, inventive, resourceful and worthy of the hopes her grandmother placed in her. But will any power she gathers around her be enough against the red dragon, Livingston, and Captain Frye? There is much to wonder at and many battles to fight alongside Wylah as this tale unfolds. Along the way there are many monochrome ink-wash style illustrations that give the story the feel of a fantastic graphic narrative or an animated adventure game. The monsters are monstrous, the landscapes magical, and each figure commands imaginative space.

This highly professional production will appeal to anyone interested in an Australian native backdrop to an exciting magical tale of dragons, heroes and villains. It is an epic tale in the making, one that cannot be contained in a single volume, so be warned young readers, you will be flying on from this book to the next.