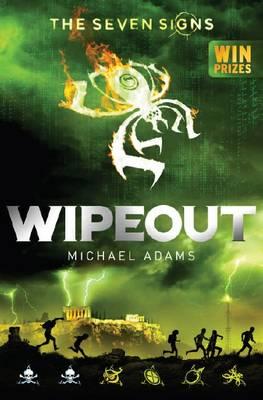 I reviewed the first book in this series, Skyfire, and like the first, this book is high action all the way, as the seven teenaged DARE winners race to decipher clues that could save the world from another unknown but potentially deadly threat thrown at them by the evil Signmaker. Having access to the Infinity corporation’s private fleet of super-sonic ‘SpaceSkimmers’ and car drivers, the teenagers are transported around the globe, tracking down clues and seeking out people who can help them unravel the Signmaker’s puzzles, all the while keeping in contact via mobile phone and hologram technology. As the book ends, it appears that DARE winners are closing in on the Signmaker but they are also being pulled further into his/her web by looking more and more like the villains. In the cliff-hanger ending, the Signmaker reveals a new sinister game.

With explosions, murder and anarchy aplenty, this is one for action lovers and readers who like a challenge deciphering clues. The short chapters make it easily digestible for proficient readers. The header of each chapter pinpoints on a map where it is set. Given that all seven DARE winners are from different countries and they fly around the globe hoping to thwart the Signmaker’s disastrous plans, cultural references are embedded into the narrative. In this instalment, the main action centres on Greece, the cornerstone of democracy, and its ancient buildings.

In book three of the series, I found some things started to detract from my engagement with the characters and story. Perhaps because in this book the teenagers are engaged in a lot of the action collectively as a group, I felt that their personalities got lost, despite a few superficial idiosyncracities (like Mila ending each sentence in ‘yes?’ and JJ having mechanical legs). I also started to question the believability of some aspects of the plot, especially how the teenagers are given unrestrained access to be transported around the world, and given unquestioning support from adults, like plane and taxi drivers, despite the world being on the brink of chaos. Perhaps this will be resolved in later instalments.

This series is promoted as one story over seven chapters, and reading the series in order is essential to the plot, however I would have found it helpful to have had a cast of characters and a little about them to refresh my memory at the beginning of this book. The first in the series, Skyfire, set up the characters well.

I’m sure that mid grade fans of action, adventure and mystery will not be disappointed in this instalment and readers get a chance to be involved in the creation of the last sign in the last book by visiting the scholastic website and answering a question from the book.