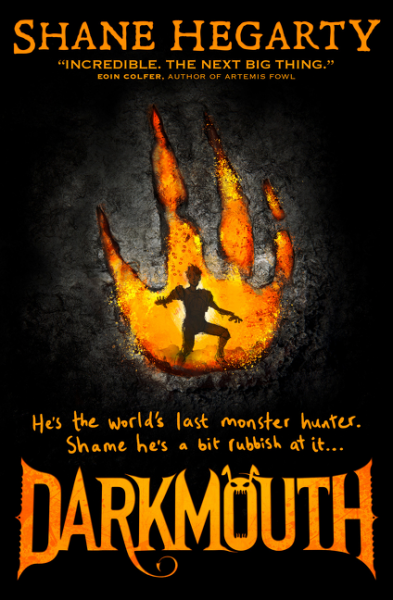 In a forgotten corner of Ireland lies the town of Darkmouth, a town where for centuries the citizens have been plagued by the invading hordes of mythical creatures – known as Legends – that wander through magic portals and wreak havoc upon the frightened townsfolk.  For generations, these Legends have been fought back by the famed Legend Hunters, trained since birth to track down and eradicate the monstrous scourge from the streets of our world.  It will soon fall to Finn, last of the Legend Hunters, to carry on the legacy of his bloodline and bring an end to the war between worlds.

Except he would really rather become a vet and tend to sick animals.

The Darkmouth series is a hugely entertaining and wildly original debut from Shane Hegarty, who has created an astonishing world to delight and surprise us with its humour, adventure, suspense and wonder. 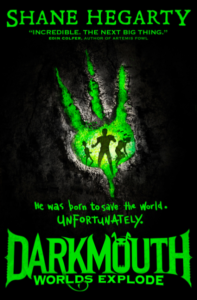 It is the story of young Finn, heir to the Legend-hunting legacy of his father, Hugo the Great, last in a long line of Darkmouthian Legend Hunters, who just feels rather awkward about the whole thing and doesn’t feel as though he’s cut out for the life his father wishes for him.  Told in the third person, it is a classic coming-of-age story, where 12-year old Finn is given a task much greater than he feels he is capable of, and is torn between his desire to make his father proud, and his need to be true to himself.  In this way, the reader immediately feels a connection with Finn.  After all, who among us has never felt completely out of our depth with a seemingly impossible task, and wished only that we could be allowed to live the life we always dreamed of?

Hegarty’s writing is skilful and engaging, packed with wry humour and plenty of atmosphere.  His characters are masterfully wrought, all with their unique traits and voices. His depiction of the Legends themselves is particularly compelling – the way in which many of the creatures are imbued with life puts me in mind of Douglas Adams, who constantly gave a very recognisable voice to strange beings, the juxtaposition of the two never failing to elicit smiles and even laughter in the reader.  Hegarty is to be congratulated for continuing this fine tradition, and with his own unique stamp and style.

Whilst it might have been tempting to stop at just one self-contained adventure, Hegarty’s world of Darkmouth is large enough to encompass four volumes, with an over-arching storyline that has not yet dulled or repeated itself.

The series will suit those young readers of a similar age to its protagonist, but as I don’t seem to have stopped gushing about it for several paragraphs it becomes apparent that the appeal extends to much older readers as well!

Book three in the series, Chaos Descends is also available; and book four, Hero Rising, is due for release in June of this year.  Can’t wait!