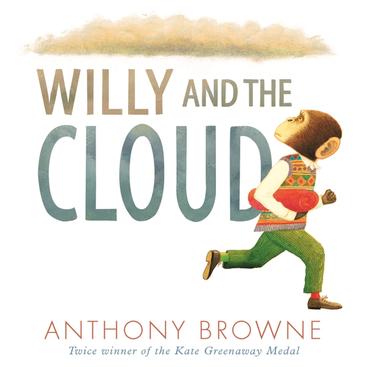 You know it will be a special picture book when the author and illustrator is Anthony Browne. As the Children’s Laureate from 2009-2011, and the winner of many prestigious awards, Browne’s books are insightful, slightly surreal and deeply observational – and Willy and the Cloud is no different.

Fans of Browne’s work will already have met Willy – a chimp who has featured in a number of stories since he first appeared in the 1984 classic, Willy the Wimp. In this story, Willy is followed by a mysterious cloud, which, despite the sunny day, prevents Willy from joining in the fun. The cloud builds from a tiny one into a huge dark storm cloud, and follows Willy no matter where he goes. The police are no help – they just laugh when he explains his problem. Others are having fun in the sun, but Willy cannot escape the cloud – until he finally faces it, names it “nothing but a cloud made of tiny little droplets of water and air!” and dances in the resulting rain.

A powerful yet simply told story of how anxiety and depression can be isolating and difficult for others to understand, this story offers all readers aged three and up a positive yet sensitive message of one way to deal with these emotions. Gorgeously illustrated in colours that blend with the tone of the text, this picture book will be fantastic for reading aloud, and also for personal reading. Reminiscent of Mr Huff, this title is another beautiful addition to Browne’s repertoire.

Classroom Ideas are available from the Walker Books website.