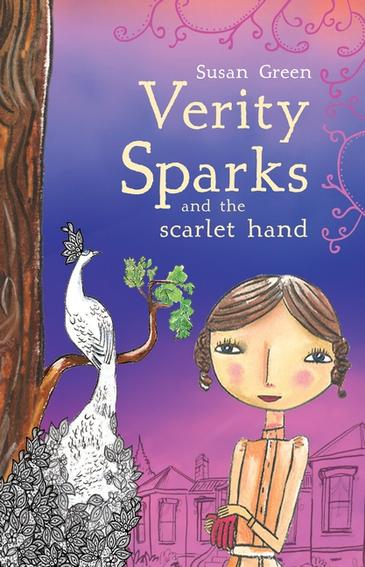 Veroschka Sparks has an extraordinary talent – she can find lost things just by thinking about them. An amazing gift to have when your friend is abducted!

Verity Sparks and the Scarlet Hand begins as the family wait for Saddington Plush to arrive to celebrate Papa Savinov’s 65th birthday. After an hilarious round of 1800s style parlour games SP proposes to Verity’s former governess in front of everyone and in a fluster Drucilla packs her bags to stay with the Leviny family in Castlemaine. As chance would have it, Verity and her family are invited to stay nearby with the Petrov family. As a mystery unfolds Verity’s gifts provide her with cryptic imagery. And, to add to the mix, Verity catches glimpses of a woman who looks identical to the photo of her dead mother. Is she seeing a ghost?

Verity tries to draw on her gift and the talents of those around her to solve these puzzles, save her friends and mourn the mother she never knew. In the end she mourns the father she had recently come to know and love.

The era is a major feature of the story, a feature which the author might have considered alluding to when dropping the reader directly into a family dinner conversation. I can imagine young readers getting frustrated with the pace of this story until they realise this book is set in Australia in the late 1800s – before fast cars, mobile phones and internet. It is obvious to me, as an adult with prior knowledge, that Susan Green, has done marvellous research on Australia in the 1880s, but I feel that this knowledge has not been effectively woven into the telling for the target age range of 10+years.

Although 15 year old Veroschka Sparks is a strong female protagonist that girls of today will definitely relate to, I felt that the character development relies very heavily on previous books in the series. I was bombarded by characters as soon as I started reading and I spent the first few chapters trying to determine the role of each; because, as everyone knows, you need to pay particular attention to suspects, clues and motives in a mystery. And, although the characters sounded delightfully quirky, I felt that the story did not dwell long enough on them for me to feel a connection to them or to see the connection between them.

The chapters were well titled but I found the use of stars, both at the base of each page and to indicate a new moment in the story, confusing. The names of the characters were amusing and made me grimace and smirk as my imagination gave each character substance. The intermittent mention of France, Germany and Russia gave an international flavour to the text but the historical references made the story fragmented and did not provide substance to the whole.

On another note, is there anyone out there who likes to compare the cover art of books to the story they conceal? If so, take the time to absorb Lisa Coutts’ artwork for the covers of this series… wonderful!