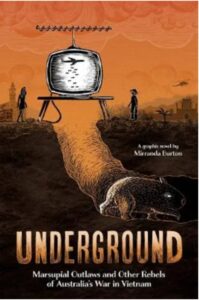 Is this absorbing and lively book a work of fiction, a history, a series of min-biographies, an oral history, or a re-enactment of real events re-imagined? Underground is already a 2022 Notable Book, and in the running for the CBCA Book of the Year Eve Pownall Award for an information book. But exactly what kind of book this is, doesn’t matter so much as the fact that it can be enjoyed on a number of levels for a variety of reasons.

Mirranda Burton began drafting Underground while she was a resident artist at Clifton Pugh’s former studio, Dunmoochin, ‘in bushland just outside Melbourne’. There she met Jean McLean who had convened the Save Our Sons movement so pivotal to the anti-war protests of the late 1960s and early 1970s. She met with Bill Cantwell, a Vietnam veteran whose wounded image is sculpted as part of the Greensborough parkland War Memorial. She also with Mai Ho who escaped Vietnam by boat in the early 1980s, seeking asylum in Australia for herself and her children.

Burton records their stories in vivid, action-packed black and white comic panels across more than two hundred pages. Intertwined with their stories is the world of Clifton and Marlene Pugh as they became committed to the public outcries for bringing that war to a close. And yes, there is a wombat that was called up for national service, there is a young Gough Whitlam sitting for his portrait by Pugh and manoeuvring for power, and there is Bob Hawke promising to fix things. As well, Burton includes information on how the laws relating to conscientious objection worked, police raids, wharfie strikes, the infamous national service ballot, and growing crowds of protestors on the streets.

Jean McLean and four other women famously spent time in Fairlea Prison where they eventually formed alliances with the no-nonsense women-prisoners on the inside, perhaps through managing to smuggle in so many cigarettes. The hard working and very smart Mai Ho later became the first woman to lead a quality control team at Holden’s Melbourne factory assembly line.

Underground is a complex set of tales, sometimes told diligently and sometimes wryly, but always with the kind of drama that keeps readers moving through those comic frames, caught up very much in the lives of these characters. Burton is to be congratulated for holding so many threads at once, and for bringing them together in a fine work of both art and storytelling. Anyone curious about what happened in the back rooms and public streets of Melbourne during the Vietnam war and its aftermath will find plenty to witness here and think about. And because this is a graphic narrative, there is the added bonus of visiting (or revisiting!) the haircuts, the fashions, the accessories, the streetscapes and the attitudes of those times.

Highly recommend for curious readers and budding graphic-narrative artists from ten to fifteen and beyond.