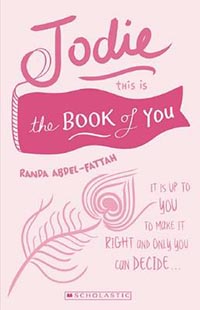 This is a rites-of-passage story about Jodie, a tall girl (always the tallest in her class) who has issues about self-esteem.  She has two special friends who provide her with support and good advice, which she doesn’t always accept.  But not everyone at school is so friendly and she is often subject to bullying and name-calling.  Not surprisingly, she finds this very distressing especially as she is going through some difficult changes in her life.

Jodie and her friends are in their last year of primary school, a time which is both exciting and challenging.  Furthermore, Jodie’s parents are divorced and she finds this difficult to cope with.  Despite the best efforts of her father’s girlfriend, Carla, Jodie refuses to accept that her father will not be returning to Jodie’s mother and that his life is now with his new family.  She concocts a plan to try to bring her parents back together, a plan which is, of course, doomed to fail.  Learning to adjust to new family life is a slow and painful road for Jodie and her difficulties will resonate with readers who have been through the same adjustments.  Neither Jodie’s mother nor her father seem willing to discuss the situation fully with her, often resorting to the ‘we’ll tell you more when you’re older’ line.  This seems a little unlikely these days when parents are so much more willing to discuss such issues with their children, recognising that such discussion is an important part of developing understanding and acceptance on the part of their children.

It is not just Jodie who is having a hard time coping with the new arrangements though.  Carla’s daughter Samantha has just as much trouble accepting Jodie as neither girl really wants to share their parent with the other.  Samantha resorts to blog bullying, an all-too-common phenomenon these days.  These anonymous attacks are very confronting for Jodie but, when she works out who is doing them, it forces a showdown between the two girls during which Jodie, the elder of the two, realises that she isn’t the only one who is unhappy.  This is an important ‘growing-up’ moment for her.

Interwoven with all of this is a touch of magic.  Jodie and her friends find an old book in the walls of the school library.  It is a kind of diary, although the pages are blank, and they are able to find out a little about its original owner, a girl who lived in the school many years ago when it was an orphanage.  Mysterious messages appear on its pages, addressed to Jodie, and she chooses to interpret these as directions about what she should do about her father’s new relationship.  Past and present intersect and the book is the talisman which allows that.

The book would have benefitted from closer copy-editing, as there is a rather irritating misuse of I when it should be me in many places in the book.  In some places too, the dialogue between the girls seemed rather stilted and not altogether convincing for the age-group depicted.  MH