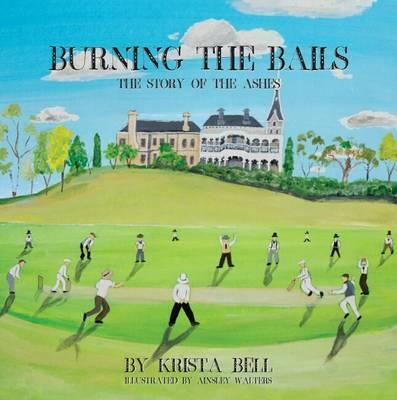 Cricket enthusiasts will embrace this production with enthusiasm.  While it is in narrative form, it is mostly factual, and packed with information.  The story is told through the eyes of Russell Clarke who when the book opens is on a deckchair ‘engrossed in his cricket book’ on board the Peshawur sailing home to Australia from England.  Russell is a cricket fan, so is drawn to a Miss Morphy, also on board and a friend of his mother.  Also on board are members of the England cricket team, captained by Ivo Bligh, a perfect gentleman.  In the course of the voyage Mr Clarke invites the team to spend Christmas week at the Clarke’s country residence in Sunbury.  So on Christmas Eve the All England cricket team play an Australian eleven.  During the course of the match Miss Morphy and Mrs Clarke discuss a London newspaper article about the ‘Ashes of English cricket’, whereupon Mrs Clarke proposes burning the bails from the day’s match and giving them to Mr Bligh as a memento to his stay in Australia.  The story goes on to detail how Russell proposes an urn for the ashes.  That urn was to become the trophy for future Test series between England and Australia.  This book fills out the tale through Russell’s eyes and the action is detailed in period style through the illustrations that capture the manners and protocol of the age; along with its Australian background.  But because it was Russell who decided that the ashes needed an urn, and the story tells how that urn came about, this is a tale to both enlighten and enthrall young cricket fans.

Moreover the last seven pages of the book are devoted to the historic facts about the birth of the Ashes; the people, both adults and children, who were involved with the England v Australia in the 19th and early 20th centuries.  Many young cricketers today would be ignorant of the human stories behind the history of the Ashes: for instance, that Mrs Anne Fletcher, the wife of the Secretary of the Paddington Cricket Club in NSW embroidered a purple velvet bag for the porcelain ‘urn’ of the Ashes that was presented to Mr Bligh by the Fletchers after the Sydney Test, that concluded on 30 January 1883.  Stories such as this should inspire today’s young cricketers by an understanding of a gentleman’s sport that of late has been the subject of criticism and, at times, internecine strife.  MS