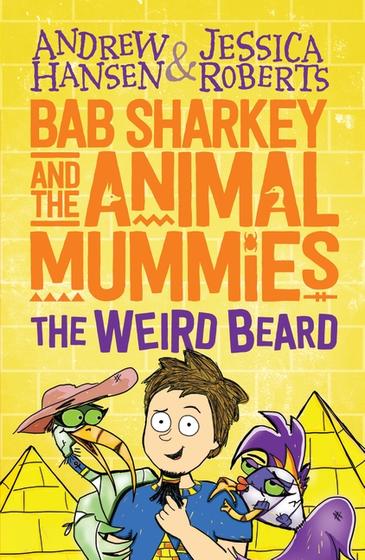 The Weird Beard certainly lives up to its title. I’m guessing that the authors wrote this book by asking what would be the weirdest and most off-the-wall things to happen, and then they went with that. The result is fun, silly and very enjoyable, and I’m sure that 8-11 year old readers of the Bad Guys books by Aaron Blabey who are ready for a little more text, or fans of Andy Griffiths, are going to have a ball with the Bab Sharkey and the Animal Mummies series.

Bab Sharkey’s mum is an archaeologist who is so worried about keeping Bab safe in Egypt that she wraps him in bubble wrap. Literally. That doesn’t stop Bab from getting into adventures when a mummifed ibis with memory problems and a fish mummy with prosthetic legs turn up, and the mysterious Pharaoh’s Beard decides that Bab is the next pharaoh of Egypt because he’s so smart.  Confused yet? It gets even better. There’s an undead sorceress who can shoot fireballs from her nostrils, and she’s not happy that Bab has the Pharaoh’s Beard. Can Bab convince the beard that he’s the true pharaoh, or will the Unpharaoh use the Smoothie of Immortality and her army of jackals to make everyone really miserable? Read on, and find out!

I love the cast of characters, particularly the memory-challenged Prong and poor Cainus, the chief jackal lackey of the Unpharaoh. The authors have a lovely balance of the strange and funny, while keeping the story moving briskly, and the details in the illustrations are worth paying attention to. Young readers should take a closer look at the map of Mumphis thoughtfully provided in the middle of the book, and any adults reading this book with their children should get a giggle out of some of the buildings – the Ankh Bank is a good one, but my favourite is the Luxout Casino.

And, of course, after his over-the-top adventure Bab finally finds the way to explain to his mother how he really feels about being bubble wrapped.

Settle in for the ancient Egyptian fun with The Weird Beard.