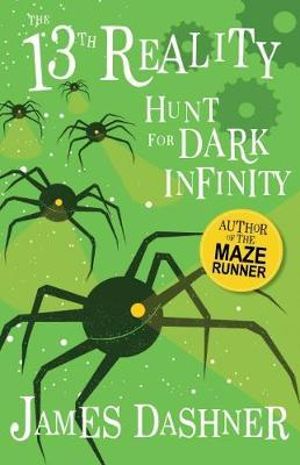 Atticus “Tick” Higginbottom and his friends, Paul and Sofia, are given notice that the next part of their adventure is about to begin, but when they are winked into another reality instead of the Realitant headquarters then they know that either something has gone badly wrong, or Master George is testing them again. Tick, Paul and Sofia find themselves in a race to solve strange clues and puzzles as they try to work their way back to Reality Prime.

Meanwhile, strange and disturbing things are happening across all of the realities, and Master George and his agents have to work out what is causing the strange fragmenting of reality before it destroys everything.

Hunt for Dark Infinity is the second book in James Dashner’s The 13th Reality series, and I would strongly recommend reading the books in order. Reading this second book, I felt as though I had walked in on a conversation halfway through, and I never really felt that I caught up on what was going on. There was a lot of context and world-building that I feel I missed out on, and there was very little recap to bring readers up to speed. Most of the glossary at the end of the book included people and concepts that were not in this book either at all or in any detail.

The concept of The 13th Reality series itself, though, is an interesting blend of magic and technology. The raw talent of Tick and Mistress Jane is a somewhat magical ability to control and manipulate quantum physics. The fragmented realities made for an interesting background to the story, and it would be fascinating to discuss the physics and philosophy that informed this series.

There was also some intriguing exploration of the lines between good and evil, and whether pure intent can ever justify terrible actions. I would have liked to see this developed further than it was in this book.

The action was briskly paced, and while the story felt thin on characterisation and depth, it was very Hollywood blockbuster. I felt that Hunt for Dark Infinity would play out well on a big screen with lots of dramatic music.

I found it hard to engage with the characters, as they felt somewhat two-dimensional, but I did enjoy the twists as Tick and his friends have to work out who is friend and who is foe, and how to solve the puzzles they’re set.

From the bright colours and cartoonish illustrations of the cover, I was expecting a book aimed a little younger than Hunt For Dark Infinity turned out to be, but it just goes to prove the adage of don’t judge a book by its cover. There are some rather dark moments in the action-based book, and with James Dashner, the author of the Maze Runner series, writing it, I’m not sure why I was surprised. This is definitely for the 12 and up crowd, and will appeal to boys and girls who like a bit of dark tension, and a whole lot of action-packed blockbuster without much emotional depth to slow it down.