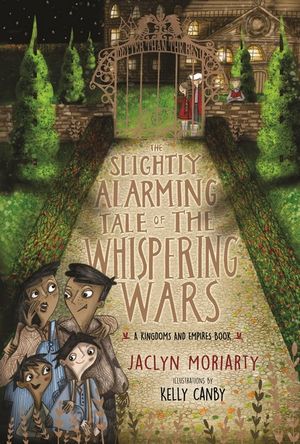 In the town of Spindrift, there is an ongoing rivalry between Finlay and the other children of the Orphanage, and Honey Bee and her fellow students at the uppercrust Brathelthwaite Boarding School. That rivalry escalates into very creative warfare when they compete with each other at the Spindrift Athletics Tournament.

Their rivalry gets shelved (mostly) when the Whispering Kingdom declares war on the Kingdom of Gusts, Gales, Squalls and Violent Storms. Spindrift, as a strategically important location, becomes the front line in the Whispering Wars, and Finlay, Honey Bee and their friends have to work out how to put aside their bickering to aid the war effort. In the meantime, something’s stealing the children of Spindrift, and a deadly magical flu is laying waste to the town. What can seven children possibly do to stop the war and save their friends?

And two sinister figures keep watching them from the shadows…

The comparison that initially leaped to my mind when I read The Whispering Wars was the Just William and Just Jane books, for anyone who still remembers those stories about British village children and the adventurous trouble they got into, some of them set against the background context of the Second World War. I was also reminded a little of Enid Blyton and E. Nesbit. The Whispering Wars is solidly fantasy, with a more contemporary style of voice, but it sits beautifully alongside the 1940s children’s books I loved growing up.

Many of those books grew out of a time when there were wartime restrictions on many things, like food and materials, and war affected all sorts of details of daily life. For the children growing up at that time, life was affected and yet life went on; games and rivalries were still important, even while big and terrible things were happening. The Whispering Wars brings this sense of incongruity to life.

Moriarty doesn’t shy away from the more nasty moments of the war that comes to Spindrift. Townsfolk are killed in the attacks. Children are kidnapped. Morally questionable things are done out of fear and anger. All of this is seen through the eyes of the children narrating the story, and I found this to be a clever means of pitching these events at a young reader’s level. Through the young narrator’s eyes, we see what happens, engage and acknowledge what has been done, and are allowed to balance that with the narrator’s uncertainty about how to respond emotionally and step back a little without undermining the seriousness of it.

The chief charm of The Whispering Wars, however, is the constant fun and bickering between the characters, and particularly the two narrators, Finlay and Honey Bee. Right from the start, the reader is sucked into the interplay as Finlay and Honey Bee take it in turns to tell each chapter, and we get involved in their relationship and learn more about who they are.

I also enjoyed the two characters who keep popping up, and inconveniently disappearing throughout the book. Bronte and Alejandro will be familiar to anyone who have read the first book in the series, The Extremely Inconvenient Adventures of Bronte Mettlestone, but you don’t need to have read that book to follow and enjoy The Whispering Wars.

This book had the perfect blend of cheeky, vivid characterisation and depth, with fantasy that felt solid and real, no matter how odd things became. Boys and girls aged 10 to 14 who enjoy quirky fantasy or classic school adventure stories should enjoy The Whispering Wars.