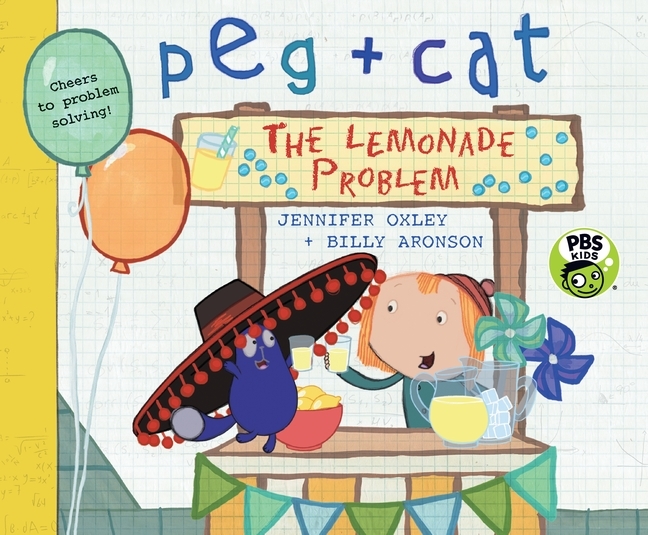 Peg and Cat are best known as characters from an animated children’s television program, although they first appeared in the children’s book The Chicken Problem. This book, The Lemonade Problem, features Peg and Cat on another of their mathematical problem-solving adventures, this time learning about simple business concepts including bartering and value.

Books that blend story telling with mathematical concepts are not always easy to find, and young readers, aged between 3-6 will love the cool characters of Peg and Cat, Mac, Ramone and The Teens, who have plenty of LLFs (lemonade loving friends). The book follows Peg and Cat, as they decide to run a lemonade stall to build Peg’s collection of marbles. The concepts of trade are clearly explained and well illustrated (with bar graphs to compare amounts and symbolic illustrations to depict the value of the lemonade cups (which, at ten marbles, are too expensive for the Teens!). The bright illustrations that resemble the animated show are fun and colourful. Cool graph paper on the background of each page, tiny addition algorithms indicating the page numbers and lots of numbers hiding in the illustrations give the book a strong  maths flavour.

Unfortunately, there is very little depth to this story, so while children will find it entertaining, it is not likely to become a treasured favourite. This book may not be strong in the literary sense, but as an addition to a school library collection, or a gift for fans of Peg and Cat, it will find its place as a useful introduction to entrepreneurial thinking and very simple mathematical and economics concepts for young readers. Catch up on their adventures on the Peg and Cat YouTube channel.