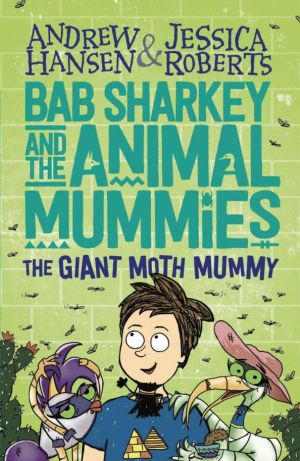 In this second book of the series, Bab Sharkey returns to the magic city of the Animal Mummies to battle the Unpharaoh, who has mastered the art of possessing people, animals and, in this case as the title suggests, a giant moth. Twelve-year-old Bab started his adventure in the first book when an ancient beard attached itself to his face, making him the new Pharaoh of Mumphis, and conferring magical powers. Not surprisingly, the Unpharaoh wants the beard back so she can rule again.

This zany, action-packed book is sure to appeal to kids who love mummies and gross-out humour — and who doesn’t? Four books are planned for the action-adventure series (pitched to ages 8+) by husband and wife team Andrew Hansen and Jessica Roberts. I’ll venture a guess that all with feature Egyptology, a fair dose of silliness and a wacky plot.

In some books, black and white illustrations appear to do little but break up the text, but here, the sophisticated drawings by Roberts have value in their own right, adding depth and detail to the story, with the characters’ eyes alone revealing a gamut of emotion and personality.

And if that’s not enough, this energetic and highly creative team has compiled a very useful Discussion and Activity Guide, available on the Animal Mummies website. There are even a few songs by Scaler and the Fish Mummies. What more could you want?