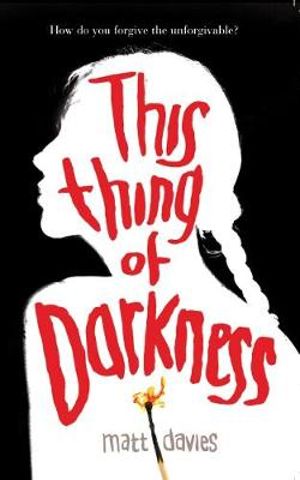 Riley’s younger sister died in a house fire, and eighteen year old Riley blames herself. Her family is struggling in the aftermath, and Riley is left trying to make sense of the world. When she meets the new boy at school, Dean is the only one who seems to understand the maelstrom of guilt, anger, confusion and disconnection that Riley feels. But as their relationship develops, Riley learns something that might explain why Dean gets what’s going on in her head, and that thing could bring everything Riley has left crashing down around her ears.

Obviously, any book that starts off with a fire that kills the main character’s sister is not going to be a light-hearted read, and there is a fair measure of trauma and death in this book. This is one for readers who can handle both the confronting violent deaths, which happen off-stage rather than being described firsthand, and the moral and philosophical questions stirred up by them.

In This Thing of Darkness, Matt Davies addresses the complexity of guilt, and the various way that it can manifest and impact on relationships. The story deals less with the moral question of whether the characters are, in fact, as guilty as they feel and as some others believe them to be, and more about how does one live with that crushing sense of guilt? How is forgiveness earned? Or are some things truly unforgiveable? Riley and Dean both have their own demons to face, but they are not the only ones. Guilt and anger has tangled more than one character in this book, including Riley’s parents, and it was fascinating to follow the way the various emotional forces interact and collide between different characters.

The author also looks at the way the traumatic events, and the emotional backlash of guilt and anger, change the people involved. Life cannot return to “normal”, and there are big consequences in both Riley’s and Dean’s lives but Davies makes the subtle point that not all of the fall-out is bad. On that subject, it is interesting to compare the different ways Riley’s friends respond to some of the changes in her.

Riley’s character felt very convincing, and I found her relatable even when she was caught up in her own pain and lashing out at those around her. She makes mistakes that are perfectly understandable. Ultimately, her heart is good, and that is what moves her forward.

The touch of mystery and tension in Dean’s story was also intriguing, and gave the story a good narrative drive.

This Thing of Darkness ends with very tentative hope, but also with the understanding that there is no easy or clear-cut conclusion. What was done cannot be undone, and forgiveness cannot always be found, no matter how penitent one may be. But Riley and Dean arrive at their own imperfect peace.

This book would be excellent for mature readers of 14 years and up, particularly as a young adult bridge to authors like Jodi Piccoult.