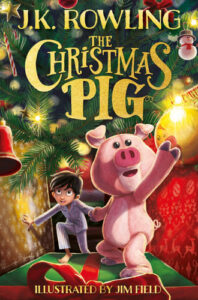 Rowling’s latest fantasy is the story of Jack, and a replacement toy pig named Christmas Pig who set out on an unexpected voyage to the land of lost things, searching for Jack’s beloved DP (Duh Pig). Step-sister Holly, who couldn’t understand all the fuss over a dirty mangled stuffed toy pig, threw DP out the car window in a moment of jealousy and Jack is heartbroken. Holly later understands her cruel gesture and replaces him with a new toy though Jack doesn’t appreciate the act.

Christmas Pig, CP for short, has magical powers combined with the magic of Christmas Eve, and takes Jack to the Land of the Lost. With help of many of the lost items he meets, Jack who has to impersonate an action figure dressed in pyjamas (because he can’t be recognised as alive) eventually manages to find his beloved DP but also finally recognises that there are many forms of love, that he must leave DP where he is and that what he feels for CP is a new companionship.

There are some quirky characters, brave or cowardly, within the many places in the Land of the Lost. There’s Sheriff Specs, the Loss Adjustor, with his big Stetson hat; Fingers the old gardening glove on the piano; Lunchbox with its inhaler inside; Jack’s home-made Christmas tree Angel. The many parts of the Land of the Lost are fun: Mislaid, Disposable, Bother-its-Gone and Island of the Beloved. Adult readers will recognise all these levels of the ‘missing’. The happy ending does not detract from the seriousness of some of the themes.

Jim Field’s black and white soft-focus illustrations, inserted at the beginning of each of the 9 Parts, add so much for the reader.

This is a sophisticated version of ‘what’s happened to the lost sock’ with many strong characterisations as well as eccentric situations. It’s set at Christmas, but like Dicken’s A Christmas Carol, is not only a Christmas story. Rowling has included subtle social and political comments on many aspects of life, nominally from the point of view of young Jack, though told in third person. It is a story which young readers will thoroughly enjoy, and older readers of all ages will understand the complexities of life.