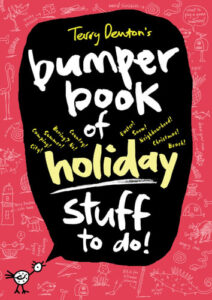 I don’t think anything make me (or my nephews for that matter) turn my nose up more during my holidays than something called an ‘activity book’. Thankfully, this isn’t that title, but it is indeed a massive activity book coming in at 304 pages.

That said, I don’t think I’ve ever had an activity book that asked me to draw a sea monster and make it big, ugly, scary and a bit fluffy. Or ask a young reader to draw what a bull is chasing!

That is the kind of activity young readers can expect in this bumper book from Terry Denton. These activities will test their imagination and pretty much encourage them to let their creativity go wild – and isn’t that something that will keep a young mind (any mind) excited and entertained? It’s no wonder that Terry Denton remains a staple of children’s books in Australia, having been writing for about 30 years.

The activities in this book are hilarious, mind-bending (for me; drawing a big city perspective anyone?) and fun (matching the tops of animals to the bottoms!). The book is a handy size to carry – for the car, the bus, or even the plane if you and your young readers are off somewhere further afield.

And there a plenty of activities that will need an adult’s perspective and explanation, making this a bumper book for the whole family really!