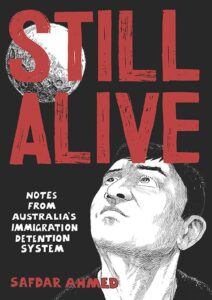 Still Alive is an extraordinary and complex book. It is presented in the format of a graphic novel although it is really an expose of the life of detainees in Villawood Immigration Detention Centre. Safdar Ahmed began visiting Villawood in 2011 when he brought art materials into the centre. Under his guidance, some of the detainees began drawing their stories.

Quite early in the book Ahmed reflects on the value of art in dealing with trauma and reveals its efficacy in helping him deal with his own mental health issues. He also undertook the project as a way of developing friendships amongst the detainees and allowing them to tell by drawing, often without words, the frequently horrific experiences they had come from. The early drawings he saw motivated him to develop the book and explore in more depth the issues raised by the detainees (p. 15).

Names have, of course, been changed. In the nineteenth-century so-called ‘waif stories’ would focus on one child as emblematic of the whole issue of homeless and neglected children and Anne Frank’s diary allows readers to understand an aspect of the horrors of the Holocaust through the eyes of an individual. In Still Alive, although names have been changed, focussing on the stories of individual detainees has a similar effect. The story of Haider, for example, a Hazara refugee, begins with the horror of the massacre of many of the young men in his village. At the age of 13, Haider flees to Iran with his mother and siblings. His long, dangerous and tortuous journey is told in an autobiographical style, making it immediate and moving.

Autobiography is only one narrative technique used in the book. There is, for example, a section outlining the history and development of the so-called ‘Pacific Solution’, the ways in which governments have developed hostility to those refugees who have come by boat and another section which is a list of rules by which refugees living in the community must abide – or risk being sent to detention. Some of the book uses a journalistic style to report on conditions on Nauru. Still another section describes daily life in Villawood, a life that is a mixture of boredom and futility and harassment when sometimes the most positive thing a detainee can say is they are ‘still alive’.

Still Alive is divided into chapters with stark black pages and a full-page, confronting illustration separating each chapter from the next. The book illustrates – both actually and figuratively – the power of story – and storytelling. Still Alive has won many awards such as the NSW Premier’s Literary Awards Book of the Year and Multicultural NSW Award.

Teachers’ Notes and other resources, including an ABC ‘Compass’ program on Safdar Ahmed, are available for this book from the publisher’s website.