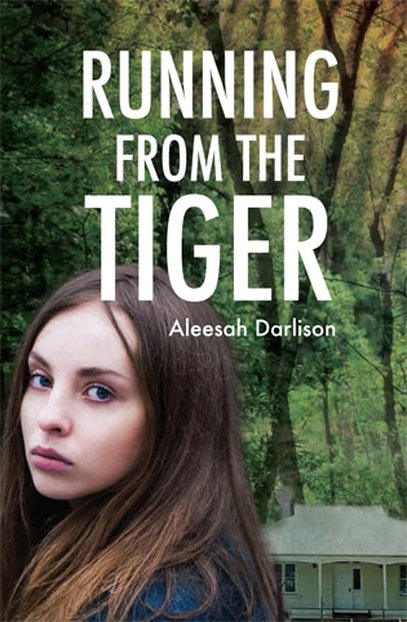 Running from the Tiger is an intriguing read from the start. It’s written in a way that captures the relationship between abuser and victim at its most raw. This is both confronting and thought provoking.

The first appearance of the tiger is swift, real and sickening. Eleven-year-old Ebony, who is frequently the victim of her father’s alcoholic induced anger describes the abuse succinctly and matter-of-factly, making it seem normal, or at least Ebony’s normal. Ebony retreats to her private place when she is beaten, a strategy she has developed to cope with her life circumstances, further highlighting the normalisation of Ebony’s abuse. It also works to make this book more palatable for a middle grade reader as graphic details of her abuse are not divulged when Ebony closes her mind to her immediate surroundings.

Darlison has expertly depicted the victim mentality in this story. From a child’s perspective, the psychology of the mother as victim is captured well, ‘why can’t you just do what he says, stay out of his way’, ‘it would be easier for all of us’, Ebony’s mother pleads effectively putting blame on her daughter rather than her husband, the abuser. Ebony takes this on board with phrases like, ‘I deserve it’, ‘I do the wrong things’, ‘it’s discipline’. Even though her internal dialogue is the opposite. She wants to say that her dad is wrong; he drinks and gambles their money away. He is lazy while she works, he doesn’t want her to achieve. This internal debate coils inside of Ebony making her angry at her mother, her father and the world. She does not like how her mother defers to her father for everything, her submissive nature, and her lack of power. Ebony cannot understand why her mother never intervenes when her children are being hit. Her portrayal as weak, submissive, and disempowered is confronting and anger inducing.  However, glimpses of her thought processes seen from Ebony’s perspective redeem her. Her fear that divorce will adversely affect her children, her anxiety at her lack of money and resources, and her banging on the door of the bathroom while her husband beat their children. All of these tumultuous emotions are cleverly and at times subtly portrayed through the eyes of eleven-year-old Ebony.

The tiger metaphor given to Doug, Ebony’s father, is fitting in every sense of the word. She is prey, he is predator. The ability of a tiger to camouflage into the world around it when it is hunting, to hide from the outside world before pouncing on its victim, is also an apt description of Doug who functions outside of the home working at the local abattoir, a member of the community as any other. Yet when he is home his real stripes appear.  Similarly, one cannot miss the obvious idiom related to this metaphor, ‘a tiger never changes his stripes’. This is disconcerting given the final showdown between Ebony and her father, which results in her giving him a second chance. The reader has to question whether this broken man, a victim of childhood abuse himself will ever be able to change his essential nature and more so whether he is in fact deserving of another chance. In this sense this story is ambiguous in its conclusion.

In amongst Ebony’s domestic turmoil she begins a relationship with the new girl at her school, Teena. Having experienced her own difficulties with the sudden death of her mother and a father who is unskilled in the efficient operations of a household of children, Teena and Ebony share a unique bond. Ebony’s secret is revealed to Teena and this strengthens their relationship. However, it also reveals the shame Ebony feels as the victim of domestic violence and, after Teena informs her father of the abuse, it demonstrates the lack of action from members of society when it comes to domestic violence. Teena helps to give Ebony confidence and the knowledge her life is not how it should be or needs to be. This sees the development of Ebony as a stronger character who can stand up to her father.

Overall, I liked that this story humanised every character, even the unlikeable ones. Doug’s story as a man struggling to deal with the aftermath of his abusive childhood which left him with insomnia and a drinking addiction, for example. Or Teena’s father who obviously loves his children dearly but cannot properly care for them after the death of his wife. I also greatly admired the writing style of Darlison, who takes a confronting and often taboo topic and turns it into a story suitable for middle grade readers. This is especially important for those children whose lives are similar to Ebony’s. The inclusion of helpline contacts at the end is also a thoughtful and responsible addition. I did find the terribly sad end to Teena an unnecessary conclusion to this story, however.

I’d recommend Running from the Tiger to any reader older than twelve who is interested in finding out about the adversity suffered by many in our community in an easy to read format.