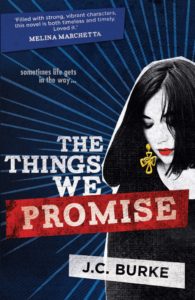 When I receive a book to review from the CBCA I write notes as I read to remind me of what I am thinking and feeling as I go along. However, while I had my paper and pen by my side it remained completely blank until I turned the last page and closed this book for the last time. This story is real, so real that I was deeply absorbed in the characters, the era, the world of Gemma.

Gemma begins as a girl whose life is focused on what she’ll be wearing to her formal and how her hair and makeup will dazzle all her peers after her famous New York based stylist brother works his ‘magic’ on her. This is all before the dreaded AIDS virus worms its ugly head into her life and destroys everything she holds dear.

At once her life is destroyed, her formal dress, her hair and makeup all pale in significance or importance.  This movement marks a momentous development in Gemma’s character as if the reader is witness to the exact moment she moves into adulthood. Yet, for those around her life seemingly goes on as normal, as if the massive changes in her own private world are not felt in the outside world. Shouldn’t there be a mark? Something to indicate the deeply embedded changes she and her family are suffering? This capturing of grief, the denial, the anger is so real and so eloquently described by Burke. It is all made so much worse with the need to hide. The taboo nature of homosexuality and the bigotry and fear associated with AIDS and HIV in the late 80’s and 90’s is felt so strongly by Gemma, her mother and her brother. The understanding and acceptance of this as the status quo by Gemma’s brother is terribly poignant, particularly as he reaches out in his final days to the father who rejected him because of his homosexuality.

The characters are so very real in this story, from the protagonist Gemma, to her brother, the other AIDS patients on the hospital ward, and her closest friends. They are developed deeply and slowly, almost sneaking up on the reader, making the tragic ending all the more traumatic. This is best witnessed by the development of Gemma who represents the time of adolescence where one is expected to behave like an adult but is regularly treated as a child. The turmoil experienced by Gemma, who is protected from truths that are deemed too hard hitting for her to bear, is realistic and nostalgic. Being denied the knowledge that her brother’s partner has died after suffering from AIDS makes her grief so much more palpable as it mixes strongly with anger and hurt at the exclusion. It is not until her mother and brother accept that she is not only capable of hearing and dissecting information, but that she needs it to help her cope and feel included, that the story comes to an end.

At one point in the story Gemma dances to Salt n’ Peppa amidst her family and friends next to her dying brother’s bed in a beautiful scene that deserves a mention. The undercurrent of sadness is overridden by happiness. Prior to this Gemma comments that, from the moment she found out her brother was dying, they were all playacting, behaving how they thought they should. Her mother’s, her brother’s and her own emotions and responses no longer came naturally, everything was considered. They were together yet separate in their grief, not wanting to share it with each other, her mum went to her room and Gemma ran to the park. Then in this scene they come together, together in their grief, in their humour and in their shared experience.

Creating a sense of nostalgia for a bygone era is another of Burke’s strengths. From the musicians, TV shows, movies, fashions and phone booths to the mass feeling of dread and fear about homosexuality causing an ‘AIDS epidemic’, I was transported back to my youth. This was not done in a tokenistic, name-dropping way but in a subtle inclusion in the description of Gemma’s every day life.

This is certainly a time that should not be forgotten, and Burke has masterfully portrayed the human face of the destructive results of bigotry, irrational fear, misguided hype and ignorance. A must read for anyone who remembers this era, those who have forgotten and those who need to be told.