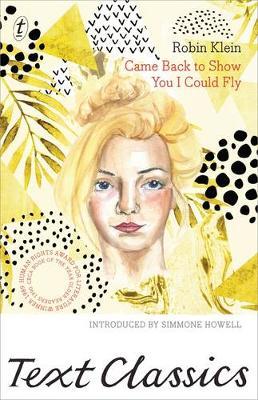 When timid eleven-year-old Seymour jumps a fence to escape a group of intimidating boys he meets Angie, a twenty-year-old woman with a girl’s face and bizarre fashion ideas. An unlikely friendship ensues.

Seymour is on school holidays and because his mother and father can’t work out their custody and relationship issues he has been dumped with an elderly friend who is stern and critical. With weeks of stifling boredom ahead of him he heads out to the shops and finds himself in Angie’s backyard. The story is told from Seymour’s perspective yet the reader is given insights into Angie from lists and letters scattered throughout.

Seymour’s largely innocent observations and opinions are overlaid with subtle hints for the reader to decipher. For example, the attention Angie receives on their outings is not because of her astonishing beauty as Seymour assumes but because of her awkwardly loud social faux pas in both dress and behaviour. The reader is quickly clued into the daily hospital visits being a drug rehabilitation program and not special medicine for Angie. Likewise, her flus are either set backs in her rehabilitation or withdrawal symptoms. All of this is revealed without Seymour ever explicitly stating them, demonstrating the beauty of Klein’s writing. I experienced no frustration at Seymour’s apparent ignorance of Angie’s predicament. This may have been the case as Seymour squashed doubts he experienced in relation to Angie at times throughout the story, making him appear to want to hang on to his innocence rather than see what the reality is.

The sadness in this story was paramount for me. Angie’s innocence was not feigned despite her obvious life experience. She clearly lacked the ability to look after her health, her finances or her relationships. Her extravagant plans and ideas were pathetic and poignant in their impossibility and Seymour’s belief in them. There was also the fact that she was pregnant and in such a predicament that help felt impossibly distant.

I found it uncomfortable to read this story overall because Angie and Seymour’s heart-warming relationship could only ever come crashing to a devastating halt. However, I was pleasantly surprised with the postscript that saw the growth of both characters, and the hope that life would work out for both of them. This ending felt believable, and is another example of Klein’s beautiful writing style.