Queensland author Samantha Wheeler shares the inspiration behind her unique horse story Spud & Charli, and talks the effects of rumours and misunderstandings, with Reading Time…

I once owned a huge ex-racehorse, just like Spud in Spud & Charli.  He was big, ugly, and he smelt terrible!  But like Spud, he was surprisingly well behaved, and looked after me well over the years.  I guess my Spud taught me not to judge a book by its cover!

Talking about mis-judgments, it was this very reason that I was inspired to write Spud & Charli.  A few years ago, when the media was rife with misunderstandings surrounding the deadly horse disease, the Hendra virus, no-one really understood how the disease was transferred or what the link was between bats, horses and humans.  These misunderstandings led to rumours and scare tactics and many horse owners like myself questioned our safety.  It was the classic case of ‘jumping to conclusions’.  I wanted to write a story to set the record straight.  A children’s story suited the theme well, as so often as a teacher I saw the result of rumours and misunderstanding in the classroom.  Like adults, children can be very quick to judge.

Before putting pen to paper, I attended some firey meetings about the spread and prevention of Hendra.  People were scared, not the least because of pictures in the media showing horses dying some gruesome deaths.  This wasn’t the angle I wanted to take.  Instead, I began developing a story about riding camp, friendship and adventure, and weaving in the complication of half-heard truths spreading fear.

In order to develop the plot, I talked to local vets, wildlife carers and rangers and asked them about Hendra.  They all explained the rarity of bat diseases, and that now there is a vaccine for horses to help stem the spread of Hendra.  Strangely, very few horse owners have actually vaccinated their horses.  Are these the same people who were demanding we burn down the bat colonies?  This further cemented my resolve to write a story about misunderstandings.

The truth is, bats do more good than harm.  They are responsible for pollinating our rainforests, and very few of them actually carry disease.  Bat experts say that they are the single most important animal in our environment, having survived unchanged for thousands and thousands of years. 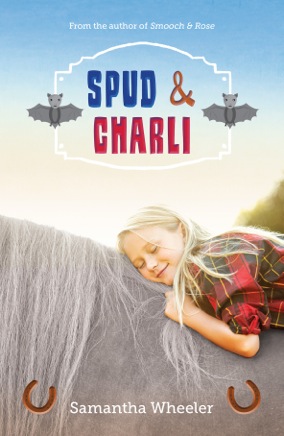 But bats aren’t the only feature of my story.  I drew on many of my own experiences to develop the setting and the characters.  I went on several horse camps from when I was about 6, and they didn’t always go well.  I always ended up with the fattest, ugliest horse.  I always prayed to ride the palomino, and when I didn’t get a chance to, I remember feeling the odd one out, wishing I was a better rider.  Certainly owning all the right gear – boots, jodhpurs, my own helmet – was a huge attraction at that age.

My next project is about the cassowary, another animal close to my heart.  It’s the male cassowary who incubates and then raises the chicks – a fascinating and heart-warming process to watch.  I am also working on a slightly different project, a YA story about a girl who can’t talk.  And then, there’s a story about a Galapagos Island tortoise and …  There is always a story to write!My daughter and I now have three horses, and this helped when writing the horsey parts of Spud & Charli.  It wasn’t hard to imagine Spud snorting green goey hay all over Charli.  My horse Oscar does it all the time!  Mr Shearer, the scary neighbour, was based around a horsey friend of ours, who, despite looking very strange and scary from his emphysema, was a wonderful, intelligent man who would never had made rash decisions about his horses.  And finally, the main character, Charli is probably a bit of a mixture of myself and my daughter – both of us have over-active imaginations and can be a bit bossy at times.