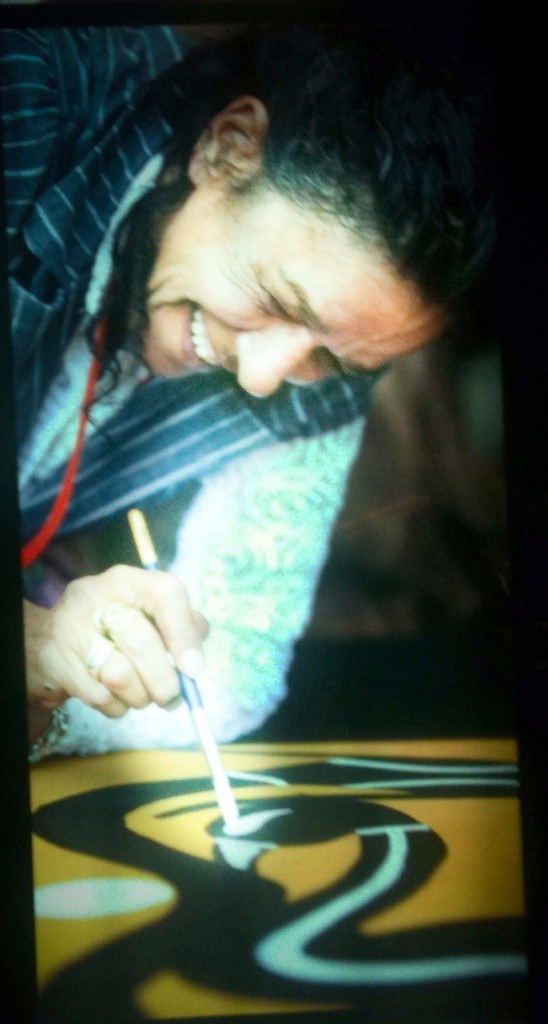 Hello, my name is Leann Jean Edwards. I have been an artist for twenty years or more and have now produced my first children’s book Emus Under the Bed.  The story comes from my childhood days on a small mission called Munnatunga, meaning place of the rising sun.  It’s about me and my grandmother’s sister Beatrice Murray, whose nick name was Dollo. I spent time with her on weekends learning how to make feather flowers and learning about our family. My grandmother had passed by this time so her sister made up for the time that I did not get to spend with my own grandmother.

In aboriginal society everyone looks after the children and everyone takes turns in sharing knowledge that needs to be taught. Growing up around some of my elders gave me lots of knowledge about our family, so my work is based mostly on family memories and events that happened before I was born, or [just]after I arrived on earth.

My family is lucky. We know who we all are. Granddad Charlie kept his children together against the odds. In those days welfare would take most children away from their families. Grandad Charlie prevented that by travelling with stock across from Hay to Wilcannia and around the Menindee lakes system in South Australia.  What inspires my work is my family and the government’s policies of the time that surrounded my family.

In many ways the work my grandad Charlie did was as a stockman. His father Jerimiah Kirby was the head stockman of Oxley station in NSW and grandad Charlie’s sisters are interred on that property. He married Christine Bright from the Narrandera community and they worked and resided in many places along the Murray and Lachlan rivers including Wilcannia and Menindee. In later life they stayed in Balranald and both are buried in the Balranald cemetery. My grandparents moved to follow work wherever it was available and a lot of my uncles worked under my grandad to be taught the ways of the stockmen. He was a good task master and he taught my uncles hard lessons in life too.  One night he asked the boys to go into town to buy bread. The boys gladly went into town but they did not buy the bread they were sent for but instead they went to the pictures playing at the local theatre. My grandad waited up patiently for the boys to return and some of them were punished severely. One of my uncles stayed away from home that night as he knew his father would be very angry about his hard earned money being wasted by the boys on their pleasures.

I grew up with these stories floating around me and thought they should be shared. I started to paint my family stories and that has led to me writing my first children’s book. My family and its history is the most inspiring well of information I have.