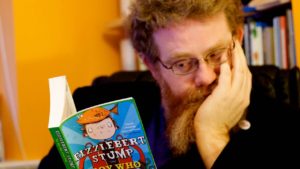 We asked A F Harrold, author of the highly praised, recently released novel, The Song from Somewhere Else to tell us about himself. He sent us this piece, called My Reading Journey, previously published in the UK in the journal, Teach Reading and Writing. He adapted it slightly for us.

Jorge Luis Borges said, “I think of myself as being essentially a reader. As you are aware, I have ventured into writing; but I think that what I have read is far more important than what I have written. For one reads what one likes – yet one writes not what one would like to write, but what one is able to write.”

I’m with him on that and since being a writer for children I’m often asked ‘how to get kids reading’ and the like (a question I can’t answer, since I was never that kid, and simply don’t understand the kid who wouldn’t rather be in a book than a football match), I thought I’d attempt to sketch out some of my own reading journey. How did I end up here today, with a book like The Song From Somewhere Else sitting on a bookcase with my name on the spine?

So, headfirst, let’s plunge into memory…

It’s such a long time ago now and I remember so little of it.

I try closing my eyes and going back.

There was a spinner in the newsagents-cum-general-store next door to the chemist in Fitzalan Road. I can see myself getting a colourful science fiction book down, again a Ladybird.

There was almost everything in the children’s section of the library. My dad had a cleaning job in the evening, at a dentist’s in town, and once or twice a week he’d take me with him, drop me off in the library on the way in, and pick me up a couple of hours later on the way home. (I can remember going with hi to the dentists once, after hours and empty the place was spooky as all get out.)

I can remember reading Billy Brewster books and Douglas Hill books and Terence Dicks there, but I couldn’t tell you anything about them. I read all the non-fiction books and had my sex education via (possibly?) Usborne’s finest. (Also, how to be a spy. And how to make all sorts of things I never made, but I enjoyed reading the instructions.)

I think there was the Beano. My brother’s Commando and Battle comics. Later there was definitely 2000AD. Still is.

There were Fighting Fantasy books. And the choose-your-own-adventure ninja series that began with Avenger, or was it Usurper? And other cheaper, knock off versions of these systems that didn’t satisfy.

There was the film of Lord of the Rings, the Ralph Bakshi cartoon of most of the first two books, rented from the tiny selection of videos for hire in Radio Rentals (or was it Rumbelows?), which led to reading The Hobbit, and later The Lord of the Rings itself.

I can remember Warhammer Fantasy Roleplay (WFRP) and Warhammer 40,000 (40K) war gaming. The rulebooks were thick and filled with fluff, background stories and descriptions and fragments.

I remember my magnificent English teacher, Mrs Coates giving me a copy of Oscar and Lucinda (which, looking back, I realise had just won the Booker) to broaden me. It was okay. She also lent me her Collected Poems of William Blake (rather than just the Songs of Innocence & Experience we needed for class).

I discovered a proper second-hand bookshop in town, run by a proper odd and grumpy and resentful-you’ve-come-in-and-disturbed-the-books bookseller. I bought all sorts of old things there. Japanese myths, Babylonian myths, poetry, dusty old things that made me sneeze.

Somewhere in there I found Bertrand Russell’s Why I Am Not A Christian, which changed my life. Instead of dabbling about with religion and witchcraft (a piece I wrote in my GCSE drama class about summoning the horned god made my teacher, an awful petty woman, take me aside afterwards and give me a Bible to take home (which wasn’t hers to give, belonging to the school)), I had cobwebs blown away and began to think better. More philosophy followed, and because of that book I went to university to study philosophy (for want of knowing what else to do).

That was what got me away from the Very Nice, Very White, old hometown and out into somewhere more interesting. I wasn’t any good at philosophy, but at least I escaped and stayed away.

I remember The Mersey Sound. Listening to the audiobook while lying on a mattress in a box-room in a shared house filled with strangers in other rooms, depressed on a Sunday morning. Barely employed. Empty-futured. Half-hearted. Utterly lost. Adrift and sinking. And the voices of Adrian and Roger and Brian pointed me forwards, onwards, up.

I remember there was poetry.

And now, there is this.

Somehow, I’ve ended up a children’s author (I have never had a plan, I never expected to be here) and I spend much of my time reading books that didn’t exist when I was a kid (David Almond, Sally Gardner, and all the glorious rest), and the ones that did but that I missed at the time: Danny Champion of the World, The Witches, A Wrinkle in Time, Marianne Dreams…

While my mum was dying I’d talk to her and she’d say, ‘Do you remember when I read you…?’ and I’d say, ‘No, I don’t remember.’ And she swore that she always read books to me, and I wept because I couldn’t remember that at all. I wept because all that remained of the good she had done is a memory of me sat or lying with the book, reading all by myself.

And, looking back, it seems I’ve lived my life reading, instead of living it, but when you hear what people do to one another when they leave the house, this doesn’t seem too bad a sin.

So, if you need me, please, just leave me alone. I’ll be in the bath, with a paperback that’s beginning to disintegrate.

Thanks to Sonia at Bloomsbury Australia for liaising with us and A F Harrold.