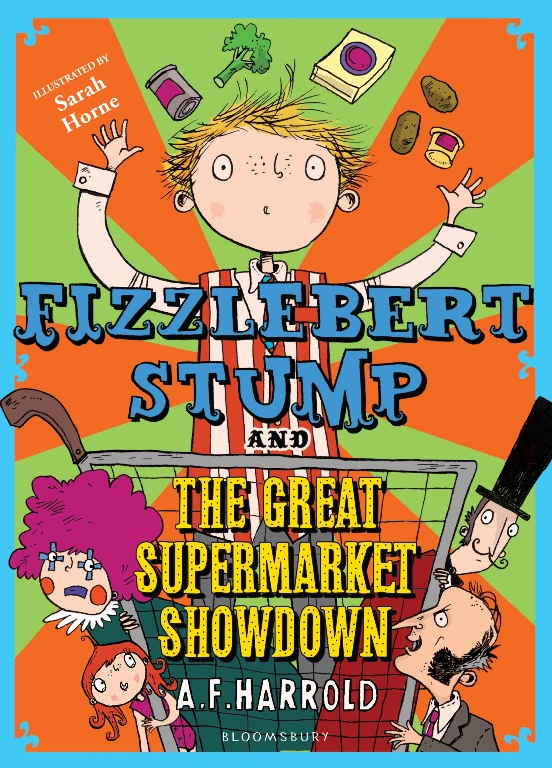 Fizzlebert Stump and the Great Supermarket Showdown is the 6th book in the Fizzlebert Stump series. It tells of a new adventure in Fizzlebert’s (Fizz for short) unusual life as the child of circus performers.  In this book the circus performers have found themselves in a miserable and dire situation.  The circus has been sold to Mr Pinkbottle of Pinkbottle Supermarkets for 500 quid. Most circus members have lost their jobs. Other circus performers, including Fizz’s parents, have had their circus contracts sold to Mr Pinkbottle and they must labour in the supermarket under his cruel and exacting eye.  Sadly too, their elaborate sequined and feathered circus outfits have been replaced by drab ill-fitting uniforms.   All have cowered to Mr Pinkbottle’s demands, except for Fizz.

Although the circumstances are dreadful, there is an upbeat tone to the story, mostly because of the humorous writing style.  In addition, the reader has confidence that Fizz’s ingenuity and chutzpah will prevail to rescue the circus and restore his parents’ and their friends’ lifestyles.  On the other hand, the nasty Mr Pinkbottle is portrayed as a bizarre cartoon style villain, to be loathed but not feared.

I enjoyed the author’s quirky, offbeat sense of humour, the eccentric circus characters and the original story scenario.  I loved the way that the author takes on a narrating role addressing the reader directly to fill in the story’s details, make interpretive comments or humorous asides. Just two examples of this witty commentary: “Let me your author, interrupt here for a moment” ; “Long and unnecessary digression warning ahead.”

I found my attention held as I wondered how Fizz would save the circus performers from their predicament. I was, however, disappointed with the final resolution as the clues to Mr Pinkbottle’s wrongdoing seem too easily revealed.

One of the book’s strengths is that with both a male and a female protagonist (Fizz’s accomplice sleuth is a girl) and no gender specific leaning, it would appeal to both boys and girls.

Capable Year 4 and above readers should be able to read it comfortably. I expect that it would appeal to a wide age range in the primary school years, although much of the humour would go over the heads of the younger kids.