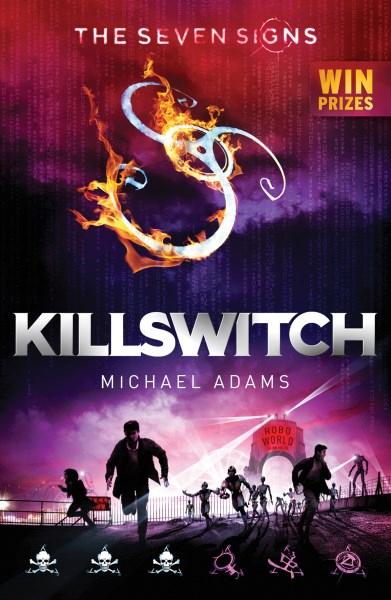 Killswitch is the fourth instalment in Michael Adams’s The Seven Signs, a high-stakes, globe-trotting adventure series, serialised across seven all action books, released over one year.

Following on from Wipeout (book 3) and another dramatic cliff hanger, Killswitch sees the DARE Seven facing danger on all sides; trapped in the midst of a looter’s paradise they are being hunted by not only their formidable criminal adversaries but by the Greek and Colombian authorities too.

This book begins with a nifty little news article, giving the reader a succinct yet devastating round-up of the worldwide chaos caused so far. If the reader has enjoyed any of the previous titles they will know only too well that this is the work of the DARE Seven’s ultimate adversary: the murderous Signmaker. Acting as a useful reminder, before we are plunged head first into the current Killswitch adventure, the article details both the nature and location of the previous terror attacks and the hundreds of lives lost along the way. Hovering on the very brink of economic collapse, it is made very clear from the outset that the DARE winners’ world is one of ruthless destruction and unremitting danger.

‘This- our prizes, money, travel, fame- is not important now! We have to think about saving the world.’

Coming to terms with the grim reality of their situation, the DARE Seven battle violent criminals, trigger-happy police, air to air missiles and even a secret North Korean spy organisation, whilst the clock keeps ticking towards, what could be, the deadliest attack yet.

Adams’s action focused style quickly absorbs the reader with each short and punchy chapter, catapulting the reader between Colombia, Greece and South Korea, all made possible by Infinity helicopters and the masterfully imagined SpaceSkimmers.

Parts of this adventure take place in unfamiliar locations such the heavily guarded border of North Korea where Adams’s young readership are able to take a fascinating glimpse at the political complexities of the region through the experience of JJ, one of the DARE seven teens heavily featured in Killswitch.

As the plot moves full pelt between one exciting event and the next, a knowledge of the storyline and characters from the previous books is fairly essential to prevent the reader from becoming lost in the narrative’s pacy, almost unrelenting action. There are thrills and frantic problem-solving aplenty and Adams keeps us all guessing by throwing in some new riddles with unexpected time penalties for good measure too.

From the very beginning one of the most impressive aspects of this adventure series has been its use of well conceived, futuristically advanced technology. Killswitch cleverly exploits a classic science-fiction theme when it introduces the challenges brought about by a robot apocalypse and the creeping mistrust of the devices, gadgets and mechanisations that the DARE winners, along with the rest of the world, have come to rely upon.

As the cyber terror rages on, fans of this intelligent page-turner are bound to find this heady mix of rip roaring adventure, symbolic puzzling and ever deepening mystery, a very satisfying read.