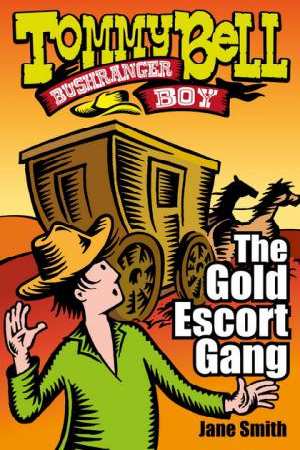 This chapter book for upper primary readers explores life in the Colonial era through the adventures of a likeable young hero. Tommy Bell is a bold, smart boy with a magic hat that transports him back in time to Colonial Australia, where he encounters bushrangers and learns what life was like in that era. The Gold Escort Gang is the third book to follow Tommy’s adventures. He finds himself inadvertently caught up in the robbery of a coach that is transporting gold, and sees for himself how bushrangers Frank Gardiner and Ben Hall behaved, and even why they did what they did.

Author Jane Smith specialises in bushranger stories. Aside from the Tommy Bell adventures, she has written a series of non-fiction books about some of these ‘wild colonial boys’. With this book she brings the Colonial era to life, basing the story on true events and introducing real people of the time. Smith is even handed in her presentation of actual historical events, with different characters offering different perspectives on what is happening and why. This allows the reader to understand that it’s not always a clear case of ‘good guys and bad guys’ – at times people are caught up in events beyond their control.

At the same time Tommy himself has a clear moral compass, and at the heart of the story is a dilemma he faces: whether to support his friend in stealing a bike from another boy at his school. This is a nice depiction of peer pressure: at first Tommy considers going along with the theft so that he can stay part of the gang, but once he meets bushranger Ben Hall and sees that Ben is going to lose everything because he didn’t say no to his friend, he finds the courage to stand up against the theft. At the end of the book he models appropriately assertive behaviour in responding to his friend’s pressure. Although he has a strong sense of right and wrong, he is also very sensible – he knows when to keep quiet and hold his opinion in a difficult or even dangerous situation.

The illustrations, by Pat Kan, are in the bold style of woodblock prints, whilst each chapter heading is designed like a ‘Wanted’ poster, giving the book strong visual appeal. At the end of the story are historical notes that provide further detail about the real people and events depicted in the book, including the time two bushrangers went skinny dipping whilst waiting for a robbery and had to flee naked on horseback when the coach came early. There is also a Q&A with Frank Gardiner, one of the bushrangers, bringing him to vivid life. For added appeal, Tommy has a horse that travels through time with him.