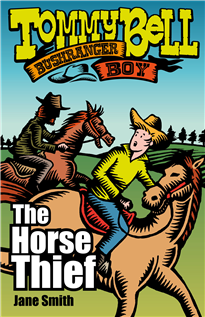 The Horse Thief is the latest in Jane Smith’s exciting series about Tommy Bell’s time travel adventures to the Australian Gold Rush period. Last time, he met Captain Thunderbolt. This time he meets the notorious horse thief Frank Gardiner – a charming, but very dangerous fellow – one that needs careful handling.  Tommy is sent to face Mr Gardiner, each time he wears his cabbage-tree hat (this is the type of hat that bushrangers wear), either of his own volition or because his concerned mother kindly puts it on his head to prevent him from getting sunburn. He ends up in the middle of a horse robbery followed by a police chase, an escape from custody with him as a hostage, followed by yet another horse robbery and police capture.

Tommy Bell faces a moral dilemma in the ‘real world’ which his experience with bushrangers helps him resolve. This sounds preachy, but it is not – the moral at the end of the story is woven beautifully into the story.

I really like the Tommy Bell Bushranger Boy series. The plots are gripping, the characters interesting and the history woven into it is based on fact. I’m looking forward to the next adventure too.