Moopers are funny shaped and coloured creatures; something like an eraser with arms, legs, a face and hair. They live in Moopertown and each of the main characters has a special characteristic which makes life difficult for them and the other inhabitants of Moopertown. For example, Giggling Gertie, a compulsive giggler and an assistant of the Mayor Beadle, is making preparations for the visit of Lord Hoity Toity Baron von Mooper difficult for staff who are trying to the preparations very seriously. And Dramatic Dom, who is naturally dramatic, gets so carried away by his own imagination that he ends up making a fool of himself in front of the whole town. 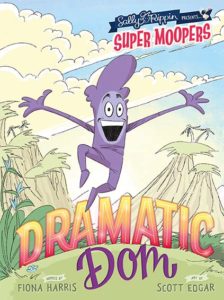 The Sally Rippin Presents Super Moopers series is designed for early readers (aged five to seven). The wording is simple with some repetition and a few nonsense words. The illustrations are colourful, depicting roundish houses with tropical like plants growing on and around them and lots of busy Moopers occupying themselves. There are also examples of pratfall humour: Dom jumping into a fountain, decorations falling down and the cook being covered with cake. Young children will like the silliness of it all.