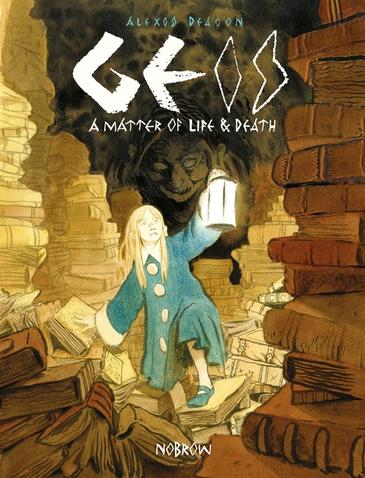 Geis: pronounced gesh, of Gaelic origins, means taboo or curse. When a geis is placed upon someone, it is like a spell that cannot be broken and certain rules must be obeyed.

When the chief matriarch dies she sets, with her last breath, a contest- to determine her successor.  Fifty souls must endure the trials that will prove them worthy to become the next leader. Fate will choose the winner of this trial… But this is no simple task nor trial.

Alexis Deacon’s latest graphic novel- the first in a series of three- tells of the way that many of the fifty souls confront the first task and the witch that presides over it. The illustrations are vivid and brightly drawn, the style unusual, but enjoyable.

The story has a strong baseline, and the background research has obviously been thorough- all historical elements are detailed and precise. The story feels short- only the first of the tasks is told, and the sudden, somewhat dramatic ending left me wondering what the devious witch would cook up next. At times, the number of characters the story follows became somewhat of a head-spin, but they all intertwined neatly at the close of the tale, the different storylines fitting together nicely.

All in all, Geis: a matter of life and death is a well-written graphic novel accompanied by lovely illustrations that suitably accentuate the storyline and historical context.  An enjoyable read for graphic novel fans and younger readers interested in history.  Suitable for readers aged 9-12+.