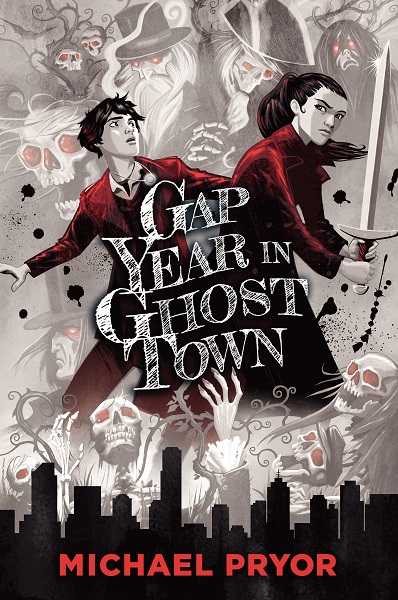 Michael Pryor is one of Australia’s premier science fiction and fantasy authors, and Gap Year in Ghost Town is his first urban contemporary fantasy novel. Protagonist Anton Marin is a ghost hunter living in Melbourne, spending his gap year deciding whether he wants to continue in the family profession: ghost hunting.  However, the Marin family’s humane methods are seen as heretical by other, more brutal ghost hunting establishments. When another ghost hunter, from the ‘Company of the Righteous’, shows up in town, she and Anton don’t see eye to eye. Rani Cross has been trained to dispatch ghosts through violent means, whereas Anton more gently ‘eases’ them off the physical plane.  When a supernatural murder takes place, and ghost hunter heavies converge on Melbourne with ill intentions, Anton and Rani call a truce and start working together.

Anton carries the story with his snappy comebacks, comic turns and internal musings, while Rani provides a measured foil, equipped with plenty of her own snark, as well as some handy sword skills.

“She rose behind the Rogue and with the nicest double-action razoring I’d seen for ages, bisected the ghost at waist level, backhand, then came back again with a deadly diagonal shoulder downwards cut that left the ghost in pieces, writhing on the floor.”

The variety of ghosts introduced over the course of the story intrigued me, with spectral presences ranging from the relatively harmless Weepers and Moaners, to the more violent Ragers and Rogues. Melbourne plays a starring role in the story, too, with parts of the tale serving as an affectionate and patriotic tour of the city. Jokes and wisecracks abound, which keep the story light throughout.

Teachers’ Tips can be found on the Allen & Unwin website, along with an author interview.