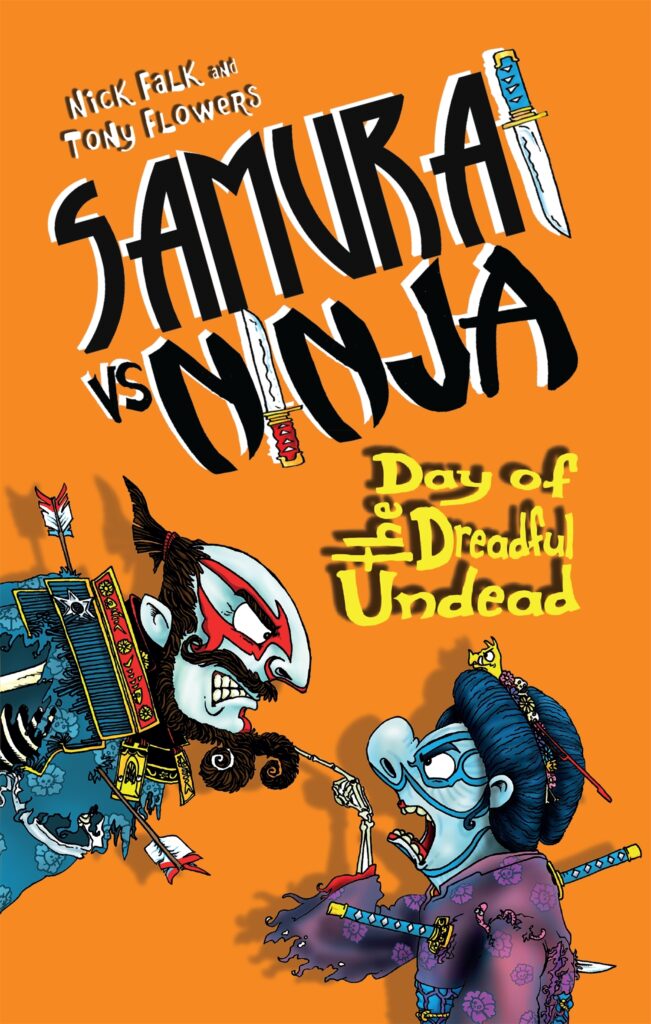 “Every year, the villagers in the valley held a feast to honour their ancestors. Paper lanterns were lit to invite the dead to join the celebration. And at midnight, the paper lanterns were floated down the river to take the dead back to the underworld. If this was not done, the dead would be left in the land of the living.” Well, it wasn’t done but whose fault is that? And how do they get the ancestors to return to the underworld now? Will the ninja and samurai, sworn enemies, have to work together?

The Oni of Japan were mythical ogres and the thing that most scared the cowardly Kaba-Sama (lord of Hokkaido Island). “And, every year, on the twelfth night of the fourth month, he would be so frightened he would hide in a bucket at the bottom of the well. For that was the Night of the Oni.” Can Kaba-Sama be protected from the Oni? Is the Oni even coming? And why do the ninja and samurai end up fighting it out this time?

These short novels are the perfect recipe for boys who like bum jokes, being grossed out, (tame) name calling, arguments and battles. The samurai and ninja are sworn enemies, play tricks on each other constantly and squabble over who is at fault when things go wrong. The books are ideal for mid primary confident readers to upper primary strugglers, and have a similar blend of text and cartoon-style illustration as current favourites like Andy Griffiths’ Tree House series or Jeff Kinney’s Diary of a Wimpy Kid.

Falk makes the most of the Japanese setting of these books, using authentic names for weapons, places, and positions of authority. In a school where Japanese language it taught, they would be an ideal addition to the classroom or library.

Unfortunately choosing Day of the Dreadful Undead as a starting point left me somewhat confused.  Although technically correct, using ‘samurai’ and ‘ninja’ as both singular and plural nouns left me thinking I had started reading a story about 2 individuals. When suddenly confronted on page 5 with being introduced to Buta-Sama ‘head of the ninja’, I had to go back and re-read the first few pages with a different mental picture. Not an ideal scenario for developing readers.

Tony Flowers’ illustrations perfectly capture the drama of the battles, expressions of thwarted characters and the disgusting mannerisms of the warriors. The cartoons are clean, consistent and expressive – everything you want in this black and white cartoon style. Flowers has resisted leaping into the familiar Japanese genres of Anime or Manga but uses a delightful blend of characteristic hairstyles and costuming, with a unique physical structure and interesting blend of fully realised and silhouette images.

These books stand alone as individual stories but contain the same group of characters and follow somewhat of a repeatable formula. Any reader who enjoys the first one they read will no doubt have to find ‘the set’. Helpful to any purchasing gift giver, teacher or librarian is the fact that it really doesn’t matter which one you read first, and they are similar enough to guarantee a positive response book after book.

If Nick Falk wrote a list of elements that would hook boyish boys into reading chapter books, he undoubtedly ticked that list off as he wrote. Target audiences will certainly be both disgusted and delighted. 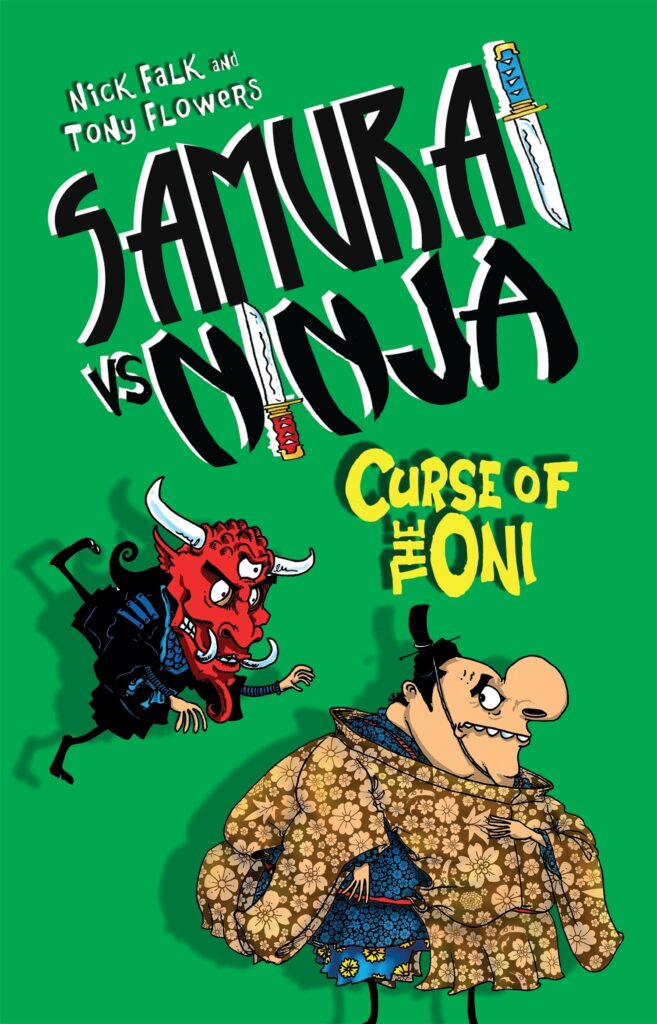