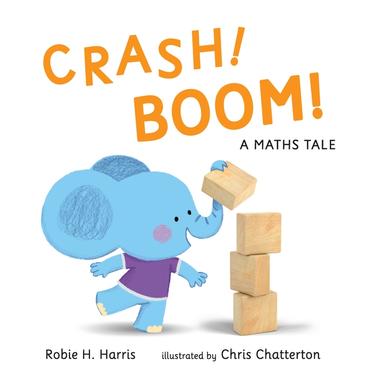 Crash! Boom! is the story of a cute blue toy elephant experimenting with block stacking.  At first he stacks the blocks on their narrow edge but discovers that this stack is wobbly and the blocks collapse with a crash and boom as he turns around.  After trying out increasingly more stable stacking methods, he discovers that his stack is most stable with the flat edges downwards and supported by surrounding blocks.

With few words and clear images, the book demonstrates basic principles of supported block stacking. The elephant character also counts his blocks, thus incorporating a counting activity in the narrative.  I envisage that the book’s block stacking activities would be best understood by children if replicated using real blocks.

Illustrations of the blue elephant and his blocks are bold and vivid, making the size and shape of the blocks distinct so that the stacking principles are clearly depicted.  Cartoon style facial expressions and body postures portray elephant’s emotional reactions, adding additional meaning to the narrative.

This book serves well as both a simple narrative for 2-4 year olds about the enjoyment of playing with blocks, as well as an introduction to some basic structural principles and counting activities.