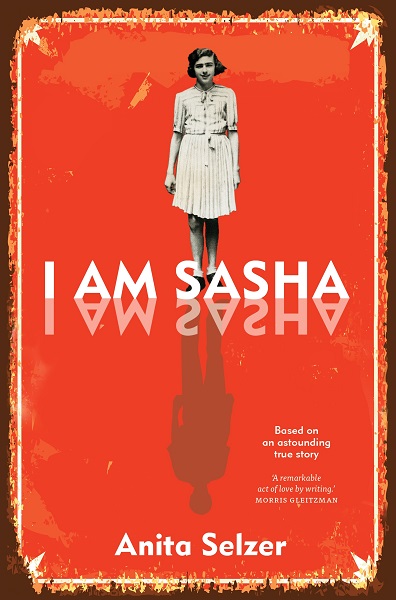 I Am Sasha recounts the incredible story of the author’s Jewish father and grandmother and their fight for survival during the Second World War. Hiding from the Nazis in German occupied Poland, Sasha’s mother Larissa decides to disguise him as a girl to avoid them being discovered as Jews. Sasha must learn to walk, talk and act like a girl, because only then does he have a chance of being safe from Nazi soldiers so intent on weeding out Jews they have resorted to forcing boys to pull down their trousers to check for circumcision.

Tigger warnings for this book are the Holocaust, antisemitism, death of family and friends and war.

It is always hard to review stories about the Holocaust because of their content and importance and there is no doubt that this is a remarkable story. Stories such as this serve as reminders of what has happened in the past in the hope that it will not happen again, and reading the author’s notes in the back of the book, this is exactly what her father and grandmother hoped. Anita Selzer wrote this family account as a tribute to all the survivors of the war and those that lost their lives. She dedicates it to her family and it’s apparent that this story has been an important labour of love.

The author has done a fabulous job of avoiding any graphic violence, the language is carefully chosen, and her imaginings of what it must have felt like for Sasha to spend his childhood in fear, hunger and disguise is intriguing and fascinating.

Still, I am not entirely sure who this book would suit. While the writing is clearly aimed at middle-grade readers, the story is in places, (understandably) tragic, shocking and raw. The book starts with a scene after the war, with both mother and son safe, which helps to quash any anxiety about the fate of the main protagonist, but despite this I found the story very overwhelming in places and can’t imagine my 11-year-old daughter or nine year old son being able to connect with some of the severity and terror, although maybe I underestimate them. That is not to say the tragedy and issues in this book should be avoided, just that they need to be kept in mind and the ramifications of what they could mean to a child thought about, before this book is recommended. I can imagine a book such as this best studied in a classroom where the complex issues and confronting realities could be discussed in a safe environment.

I am Sasha is a compelling tale about a boy who must dress as a girl to survive world War II and his brave mother who would do anything to make sure he’s safe. Spanning almost two decades and two continents, this is an important story of family, resilience and survival.