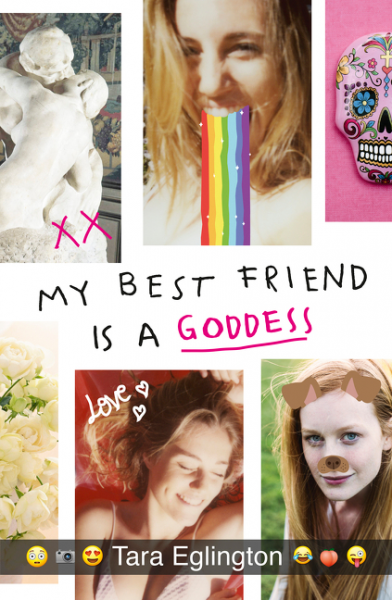 Are fifteen and sixteen-year-old girls so preoccupied with boys that their conversations contain little else but accounts of their crushes? Do beautiful girls fail to see that they are just that? Surely the best adjusted accept it and move on, and the worst adjusted need to be told they are gorgeous at least every day. That’s Adriana, one of the worst adjusted, and her best friend Emily does just that for her over a very long book.

Adriana and Emily are best friends forever, in My Best Friend is a Goddess. Adriana’s  mother is dead. Emily has never met her father, and her mother will not talk about him. Both girls conspire to bring their parents together. They want to be sisters.

It becomes complicated when a new boy, Theo, arrives at school. He is gorgeous and serious, and both girls find him charming. Emily denies she is in love. She thinks she is ugly but her artistic talent is more important than her big nose. The reader knows that Theo is really mad about Emily, although Emily thinks that Theo loves Adriana.  Theo and Emily also share an interest in Dante and Greek myths.

Adriana, however, is still trying to sort out an embarrassing experience she had last year with another boy, Dylan. Her attempts to slight Dylan are not successful, because we soon find out that she really loves him. Of course everything turns out happily in the end.

It sounds pretty silly, and at times it is, but there is a lightness and complexity that engages. The book went on too long, and both Adriana and Emily make too much of everything, but then they are only in their mid-teens. Eglington captures the triviality of it all, and builds, with some skill, a friendship between the two girls that is ready to collapse. Thirteen-year-olds will probably love it.