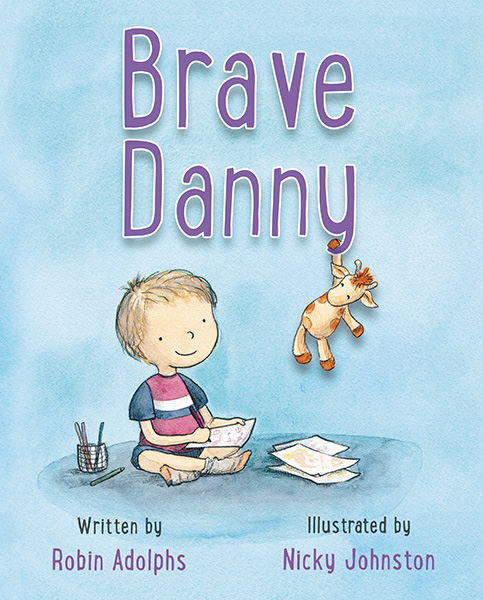 Media reports reveal domestic violence as a growing issue in Australia but what is not so widely documented is the impact on children. The latest figures from the Australian Bureau of Statistics state that 61% of female victims had children in their care at the time of the violence and 48% of them stated that the children saw or heard the violence. Brave Danny is a ground-breaking picture book, tackling this issue from a child’s perspective.

Commissioned by the National Rural Women’s Coalition, the book shows Danny struggling to cope with his Dad’s violence. We first meet Danny lying in bed at night, frightened, listening to his Dad yelling at his Mum. It’s a regular occurrence and Danny knows that when Mum starts crying, Dad will stop yelling.

It’s only when Danny goes on a sleepover to his best friend’s house that he realises not all Dads are like his. Then an acting troupe called The Life Buoys comes to school to teach the children about the importance of feelings. The episode gives Danny the courage to confide in his teacher who gives Danny a pamphlet to take home to Mum.

The story is deliberately left open-ended reflecting the complex pathway out of domestic violence. This book could be comforting and potentially life-changing for children in homes where domestic violence is taking place. It tackles the issue without being overtly frightening and Nicky Johnston’s lovely illustrations help to dilute the dark topic. Critically, Dad is never actually seen (except in shadow in one illustration).

There are accompanying notes, activities and worksheets available with purchase of the book, so it can easily be used in a classroom setting.