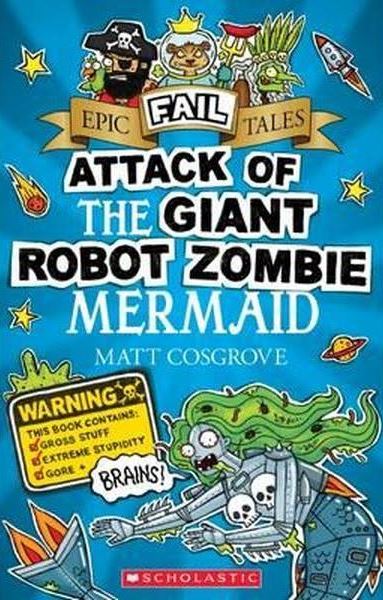 This book certainly doesn’t disappoint on the revolting scale. In fact it deviates so far from its inspiration, The Little Mermaid, that it is pretty much unrecognisable – a retelling perfect for the lover of gruesomely outrageous tales.

The youngest of six zombie mermaids is about to turn fifteen and thus experience the right of passage her elder sisters have enjoyed: a visit to the fun park where she will feast on human brains! All does not go to plan however when the zombie mermaid spots a one-eyed, hairy lone pirate with festering skin that makes her mouth water. No other human brains will do, she must have the brains of this disgusting pirate.  What ensues is an adventure like no other.

The things I liked…

The illustrations: they are delightfully and ludicrously gruesome like the plot itself. Exposed guts and bones, insect infested bodies and flatulent meerkat fathers hilariously adorn each page. The side notes, labels, notices and speech bubbles sprinkled among the graphics tell a story of their own. So much so that I found myself investigating each page carefully for every little tidbit of revolting humour.

The writing: the font changes that indicate where this ‘epic fail tale’ deviates from the original Little Mermaid story are very clever. Highlighting the language this way is an effective tool for young readers to compare the two stories and perhaps make their own attempt to change a fairytale into a grisly version of their original in a creative writing activity.

The unpredictable ending:  *SPOILER ALERT*  I never guessed the zombie mermaid would actually be able to eat the Pirate Prince! Not to mention everyone else in the castle. This was a great ending.

The extras: the create your own Giant Robot Zombie Mermaid picture is an awesome addition for any reader and it is just the beginning! It’s followed by ‘the best bonus story ever in the history of bonus stories’, The Seven Ninjas Origin Story. This hilarious extra is equally as disgusting, with its fair share of flatulence, nose picking, vomit and scabs. Fit for all those children who can’t stop laughing and pointing at their friend who accidentally passes wind in the classroom!

The witch scenes: the dialogue in the ‘I know why you’re here’ scenes is purposely repetitive which is quite funny – at first. However, when it is repeated eleven times it becomes tedious and groan-worthy. I would have preferred this part of the story to be cut after the sixth guess from the witch.

Clearly there is not a lot to dislike about this book. So if you enjoy ludicrous fart jokes, vomit, snot and copious amounts of gore this is so the story for you!