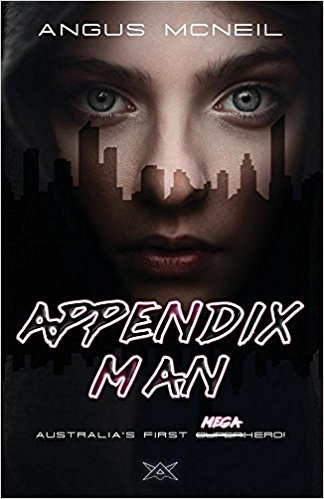 Daisy Tuck is determined to become a megahero, even though she possesses no superpowers. But after she discovers a secret bunker, her lack of powers is no longer an issue. She outfits herself in a suit packed with tech, including a built-in jetpack, and sets out to fight evil. Adopting the persona ‘Appendix Man’, Daisy soon becomes entangled with the evil Dr Green, a villainous scientist. Her level-headed friend and reluctant side kick, Leon, serves as a great foil throughout, observing Daisy’s dangerous exploits with wry comments and humour. His presence offers a refreshing reversal of superhero gender roles. The wise karate master, Hong, sums up their relationship well:

“You and Miss Tuck complement each other perfectly. She is so focused on making things right that she forgets she is not invincible. Luckily, you are always there to remind her that she is a girl, not a god.”

While the story relies on well-worn superpower/spy tropes, author Angus McNeil twists them in unique and entertaining ways, leaving the reader guessing throughout. I did note a few spelling mistakes towards the end but most were buried in the middle of action scenes and (almost) passed under the radar of this reviewer. Overall, Appendix Man is an easy read, funny and fast paced and sure to be devoured by readers 8+. Girls, especially, should enjoy this first in a series.