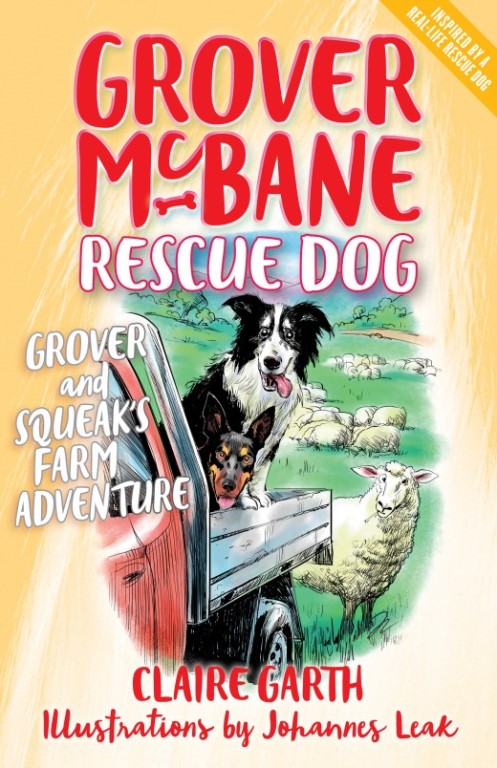 Grover McBane (complete with last name) is a dog who lives with Annie and David. I’m not sure of the background for this couple and Grover, but when this book opens, Annie and David are taking Grover on a car trip. He is terribly excited about it, until his humans surprise him by picking up Squeak, a kelpie.

For a very short chapter, Grover is jealous that they are getting a new dog, and I thought it felt a little like an older kid preparing for a sibling they don’t know quite what to make of. Squeak is very much the younger sibling, talking a mile a minute (in dog speak) and so excited it’s infectious, though maybe for readers and not for Grover!

From that chapter, it becomes clear that Annie and David are taking Squeak to his new home on a farm and a future as a working dog. Having been warned that working dogs are somewhat mean by an even meaner cat, Grover is somewhat anxious to meet the other dogs on the farm. Soon enough that cat’s warning comes true, and Grover finds himself trying to prove himself to a couple of bullying kelpies who have been working on the farm for ages.

They give him the task of herding some sheep, which is impossible for one dog as Grover finds out – there are about 150 sheep. Try as he might, he can’t get them to start moving until one of the sheep (they’ve all learned how to speak dog and can therefore speak to him) advises him that asking nicely might get more of a response than herding.

And thus Grover’s adventure at the farm comes to an end when he successfully herds the sheep, impressing the farmer, winning over the kelpies, and impressing Squeak even more.

While the book does include some illustrations, I found the end with the portraits and details of the animals much more fun to read, and almost thought they should come in the beginning to give young readers a better picture of the animals they’re reading about.

Grover and Squeak’s Farm Adventure is a story about appearances being deceiving, and a lesson to young readers to always look harder at anyone they come into contact with. Squeak won Grover over with his sheer exuberance and innocence, and then Grover won the kelpies over by listening to Barbara, the sheep who helped him. It’s a lesson that help can come from the most unexpected places!