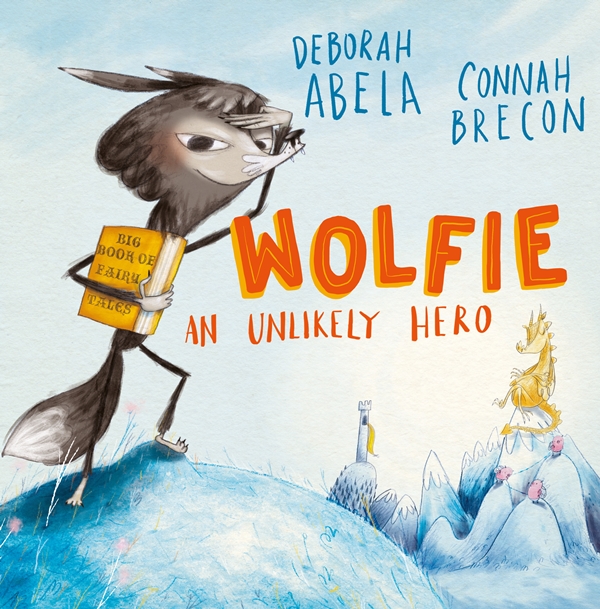 Poor old Wolfie has somehow gained a bad name in stories. In his view, this reputation is absolutely undeserved and this book is designed to tell a completely different story. To reinforce Wolfie’s point-of view, the writer uses a kind of dual narrative device. Third-person narration is interspersed with a first-person narration from Wolfie, which is addressed directly to the reader. The blurb on the back cover reinforces Wolfie’s viewpoint, claiming, he says, that ‘fairytales are nonsense’.  He is, he asserts, really a gentle, peace-loving creature, who knits and bakes pies. Astute readers will notice the allusion to a kind of stereotyped grandmother in a traditional tale. The cover also alludes to the parody of the fairy tales to be found inside. On the front cover Wolfie holds a book of fairy tales and on the back two little pigs, a Red Riding Hood figure and a rabbit gaze at the wolf with a mixture of trepidation and disbelief.

The ending is rather unexpected. We might anticipate Wolfie returning to a fairytale ‘type’ and pursuing Red Riding Hood in order to capture and eat her, for example. However, the tables are turned and our wolfish hero becomes the pet of another character of fairy tales. The twist comes after an episode which reminds us of the adage ‘be careful what you wish for’ – Wolfie’s ambition or wish, has always been to be depicted in a story as rescuing a princess. It is not a task he manages to accomplish!  Readers who know some fairy and traditional tales will enjoy this book on another, perhaps more complex level than those who don’t have that background.

The illustrations are slightly cartoonish, but full of movement and colour. Visual jokes abound, adding to the humour and fun of the written text. Faces are very expressive, often adding to the references to fairy tales – such as Red Riding Hood peering apprehensively from a hollow log as Wolfie strides through the forest.  The illustrations display a varied layout and perspective.  The  reader’s view is placed at top of the tower when Wolfie climbs up to rescue the princess, we are  looking out from behind the hens when Wolfie is lurking outside the henhouse  – the viewer has a ‘chicken’s eye view’ – and we get a close up of Wolfie’s face when he is annoyed about a story. The faces are expressive faces – Red Riding Hood, perhaps understandably, looks skeptical as  Wolfie  tries to looks ‘innocent’, the three  pigs look disbelieving and when we meet the dragon – well she simply looks adoringly at her new pet.