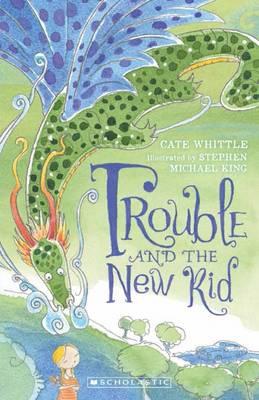 Georgia has been asked to help out the new kid in her school, Nina. Although Georgia isn’t really used to the role of welcoming committee, she welcomes the new kid anyway.  Nina isn’t like any of the other kids at school. She is meticulous, arranges her pencils and things in a specific way, arranges her fruits before eating them, and doesn’t really like make-believe stories, preferring biographies instead.  So when Georgia tries to tell Nina about Trouble, the dragon who is her friend and drops them off to the city every day, the new kid only says ‘Hmmph’. Even after their other classmates – like Kyle and Braedon – tell Nina that the dragon is real, she still refuses to believe.  Georgia shows Nina the packet of potato chips and the bottle of sarsaparilla with Trouble’s image on it just to prove he is real, but still Nina says ‘Hmmph’.

It wouldn’t have been that bad except that Nina not believing Trouble’s existence is depressing the poor dragon. And because he’s sad that someone doesn’t believe he exists, he starts to fade a little each day.  First it is just his colours, his slumped shoulders, his refusal to eat his favourite potato chips. But then it gets worse. Trouble becomes more and more see-through with each passing day. Georgia must find a way to make Nina believe, otherwise Trouble is just going to disappear completely.

Trouble and the New Kid is an enjoyable book, great for young readers (and even old ones). The book is written from the point of view of Georgia, and what a point of view it is. She gets sidetracked with little commentaries about her classmates, her school, and her life in general. And they are hilarious little commentaries. The illustrations in the book are also fantastic — just as funny as the words.

If your child is into dragons, fantasy and all around funny books, they’ll love the Trouble series.